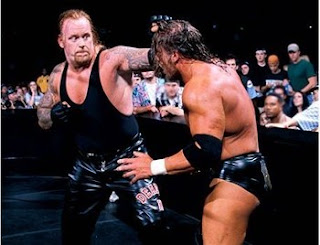 There are more WrestleMania rumours going around. Taking Sting out of the picture if he doen't debut in the WWE, The Undertaker's now rumoured oppenent will be Triple H (Left a picture of the two against each other at Wrestle Mania X7) and not only an epic match but, like last year, The Undertaker's streak against the career of his oppenent. If this wasn't big enough already, also rumoured is that Shawn Michaels who goes into the WWE Hall of Fame the night before will be the special guest referee. Of course we all know, 'Taker ended Michaels' career at last year's WM in an epic battle and let us not forget, Triple H and Michaels were part of DX together and are close friends.

I am sure there will be many more rumours floating around before the WM PPV comes around so it's just a case of keeping an eye out.
Posted by WrestleFigsUK at 14:08