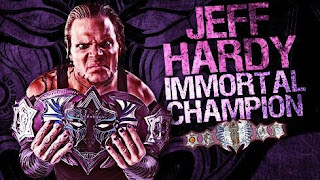 With all the hype of the build-up to the announcement of the Wrestle Mania XXVII guest host and then of course the actual return to the WWE of The Rock, I haven't blogged about TNA's Against All Odds PPV from this past Sunday in which Jeff Hardy once again won the TNA world title from Mr. Anderson. I haven't had chance to watch the show as of yet so I can't give an honest opinion but the story behind the title change is intriguing. Word is, they only took the strap off Hardy in the first place because they feared he may go to prison relating to his various charges, now I don't know if this is true or not but that's by the way now. The decision has been made to put the strap back on him apparently because he will not face any jail time now. I saw one quote either on facebook or twitter "TNA must be on something" in relation to putting the belt back on him so soon.

I don't know if the belt should of stayed on Anderson but I can see why they have put it back on Hardy, a heel Jeff Hardy, I think they will have AJ chase the belt now he is a babyface and eventually win it. TNA's programming has been OK recently, well I enjoyed the show that had 'They' revealed to be Fortune. The ratings, something I usually don't really comment or care about have steadily been increasing and so while the WWE bulid towards 2.21.11 TNA are building towards 3.3.11 and the return of Hulk Hogan and maybe some other surprises.

Stuart Rodgers
Posted by WrestleFigsUK at 10:32