This week in TNA With Olly Peters 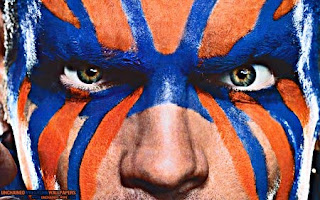 IMPACT begins in the same old way, Immortal in the ring in force, but now with the return of Scott Steiner! Does anyone really care? I know I don't. During this in-ring slagging match Eric Bischoff seems to always want to mention the other company. I really don't see how this achieves anything. I don't read spoilers on the internet and I don't know if there are any TNA fans that only watch this product. I don't watch WWE but I know what's going on in it, however if I didn't and I heard Eric going on about Nash, Booker and probably Sting having gone to WWE this would make me go and watch WWE. I don't really understand why he keeps mentioning it.
It’s been reported that "They" are not Main Event Mafia but from where I was sitting, those suits Kurt, Rick and Crimson are in sure do make them look that way.
So we move on to an Immortal skit from back stage, then after about 15 minutes we finally get a match. Ink Inc verses well Immortals Gunner and Murphy, this well known tag team. Are we running out of tag teams as they are all being split up for the X-Division? Somehow Ink Inc win, but I can’t really remember how as I kind of glazed over during this match as i’m not a big fan of either teams.

Next is video of Christy Hemmey outside of a court with, no news. Thanks Christy.
Ok I do admit I love this Eric Young character, he is a refreshing change to an otherwise dull Impact. I have enjoyed all the little backstage skits he's been doing and he really makes me laugh. Coming out and telling Mike and Tazz he has overheard who "They" are, but he can’t tell anyone because he and whoever he tells will be silenced. And he's still wearing the old TNA Championship belt, genius.

Next we are shown in a cribs style the Jarrett home and family. Does anyone remember that two years ago TNA stood for Total Nonstop Action?! What happened? I couldn’t really care less about all this. I remember when we used to have match after match, and they were good matches at that, fast paced and full of action.
Which brings me onto the next match, although at first I wasn't really sure it was a match. Bully Ray and The Pope verses Devon and Samoa Joe. Now I like the Bully Ray character and his shirt, but I think he should bully someone that's not Devon, maybe at the chain match they are in at Against All Odds. Devon could get injured somehow and be out of the picture for a while, then Ray can bully the X-Division guys building the character up for Devon to return in a few months. As you can tell I don't think much of this match and as with probably every TNA match for the past year we don't even have a finish. Also, when did referees stop the count out? Back in the old days as soon as you left the ring they would start the count, now they just prance around until "security" charge down and then that's it. Oh Pope and Joe disappeared off through the back after the Green Hornets sidekick Kato, I mean Joe's camera man, came out.

Well now that's 26 minutes in and we have only had 2 matches. What's next you ask? Well we have a three-way X-Division match between Doug Williams, Jeremy Buck and Jay Lethal. Not a bad match and I’m glad Doug didn't win. I'm a big fan of Doug's but I really think he should move away from the X-Division, and I love the Chaos Theory, it’s just a shame he wrestled Flair in the UK because I would have loved to see it live, but hey, Flair was never going to take it. So Jeremy Buck wins, and I still can’t take these guys seriously as heels. They just look so un-menacing when they try to grimace with their acne ridden cheeks. I do enjoy watching Jeremy swinging through the ropes like a monkey, and they are a good addition to the X-Division. But what’s happened to Jay Lethal? I was glad when they dropped the Black Machismo gimmick as it got a little stale, but I would have liked to see him verses Hogan in that gimmick. His promos with Flair were awesome but he has been lost in the TNA roster and hasn't done anything of late.

Next is a backstage promo, which I think has been on before, followed by some from the Euro tour. TNA is finally back on UK tv, with this being the first episode on Challenge, and they have just returned from a show in London but we are shown backstage promos from… Germany! I couldn’t care less about walking backstage with Hardy and now we get Anderson and Hardy face to face in the ring, great!
The next match is Mickie James verses Sarita in the first ever tape/strap/bare knuckle match, whatever! Does anyone else think that Mickie’s shorts look really stupid with the pockets sticking out? Does she really need them? Ok so I got really bored with this match and drifted off. I usually fast forward but for you lot I endured it!! We actually got a win but still got a run-in from Madison who Knocked out Mickie.

Now we head back to the Jarrett's. Did anyone else find the kids calling Jeff “Daddy Jeff” really disturbing?? Is this what we are going to get from now on if they are no longer doing Reaction (which we never got in the UK anyway), well it sucks. MORE WRESTLING PLEASE!!!

Now I've calmed down we can carry on to yet another backstage promo, no wait I was wrong, IT’S THE SAME PROMO!!! How many times do we have to watch this?? Plus there is still 45 minutes left!

So it’s finally time for the big return match from Genesis, did anyone see that by the way? Before the match begins Jeff Hardy, who has gone all deep south on us, and Mr Anderson start a little scuffle and it takes three refs to split them up. Why? Just let them go at it please. Then we get Al Snow and some other dude to separate them and get them into the ring. So the match goes on, but if you were at the Maximum Impact London you would have already seen this match. Well, except for the part with Fortune, I did enjoy Fortune turning face! I don't think I have heard the crowd this loud in the Impact Zone in a very long time!

Well Immortal come out again and we get a slagging match between Eric and AJ with a very weird mental Matt Hardy jumping around shouting stuff from behind Eric! I totally agree with AJ that all the "talent" Hogan and Biscoff have brought into the company has just ruined what was once a great product. I don't rate RVD, the Hardy's are a waste of time, and the whole EV2 thing, well don't get me started on that! I didn't care about ECW in the day and I cared even less when they revived it!! I really enjoyed the crowds " WE WANT SIX SIDES" chant! Hell yeah, bring back six sides. That what attracted me to TNA- good paced wrestling and a different ring, a different product! What happened!

Well I rate this out 2 out of 5!
Too many repetitive promos and not enough wrestling! Eric Young and the AJ promo were really the only highlights.

So until next time!
Posted by WrestleFigsUK at 07:17