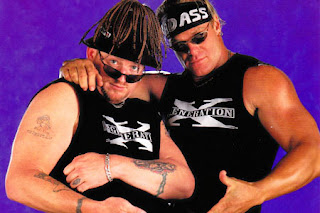 Looking back on this has gave me a lot of very fond memories and feelings I had almost forgotten about, that is why I have written this as I viewed it that day rather than reflect on phycology or match quality, frankly, that shit didn't matter to me then. All that mattered was having fun and enjoying the wrestling, enjoying the experience of seeing the top Stars of that era do their thing. I wish the younger generation would remember to view wrestling like this sometimes, to stop picking it apart and over analysing every single action, remember it's for your entertainment, so remember to enjoy it. I got to see some the greatest wrestlers of all time in just one evening when many of them were at their peak. At 14 years old during the Attitude Era, I really was part of a lucky generation who could to witness how hot the attitude era really was and what it was like when wrestling was pop culture.
Posted by WrestleFigsUK at 13:40 No comments: