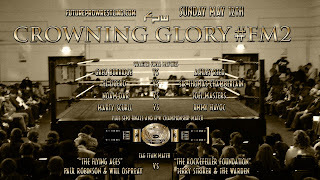 FPW are back with the above free show at the St Helier festival on 8th June and the next show, on July 7th at Wallington Halls, will see the start of a 16 team tag tournament that will take place over four shows!  Check these out on the Future Pro Wrestling Facebook page (www.facebook.com/FutureProWrestling)  Website (http://www.futureprowrestling.com) or Twitter (@FPWuk).
Posted by WrestleFigsUK at 13:39 No comments: