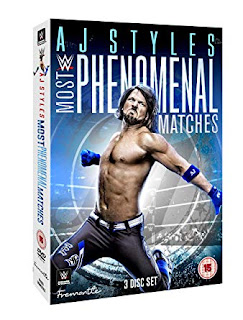 Since making the move to the WWE nearly three years ago, AJ Styles has proven himself to be one of the promotion’s most elite and dependable stars, and his quick rise to the top of the card is documented in his first WWE DVD collection, “AJ Styles – Most Phenomenal Matches”.

With the WWE Network allowing the ability to tell Styles’ story in previous documentaries, including his 365 special, “Most Phenomenal Matches” features just under 9 hours of The Phenomenal One’s best matches since his arrival in WWE at the 2016 Royal Rumble, where he was a surprise entrant after finishing his storied run in New Japan Pro Wrestling. The collection features short interview segments where Styles goes over various events in his WWE career, including the possibility that he could have been introduced with a new name, but the giant “AJ” tattoo on his ribcage led to the decision to stick with the name he had been using for his whole career. Anyone wanting footage from his time in NJPW as well as Ring of Honor or TNA have to make do with various still photos in a short summary of what he accomplished before arriving in WWE.

Disc One starts the night after his Royal Rumble debut, and the beginning of his first WWE rivalry with Chris Jericho. Their bout on the January 25th 2016 episode of RAW is a decent introduction for Styles to a new audience, giving a taste of what was to come. Styles and Jericho then formed a short-lived alliance known as Y2AJ, which came to a head when they challenged The New Day for the WWE Tag Team Titles on the March 7th 2016 episode of RAW. The conclusion of a well-worked tag bout led to Jericho turning on Styles, setting up Styles’ first appearance at WrestleMania, where he and Jericho had a good bout which could have been capable of better, but was still one of the highlights of a not-fondly remembered WrestleMania 32 in Dallas.

Styles eventually gets the better of Jericho in a Fatal Four Way also involving Kevin Owens and the returning Cesaro the night after WrestleMania on the April 4th episode of RAW, which made him the number one contender for the new WWE Champion Roman Reigns. Their two PPV bouts are shown back-to-back, the first at Payback 2016 is affected by the stop-start nature near the end that served to build up a storyline at the time between Shane and Stephanie McMahon, but the in-ring work is exemplary. The follow-up at Extreme Rules 2016 is a step up, even with interference by The Club and The Usos, and it showed that Styles was more than capable of hanging with “The Guy”. The end of Disc One details Styles’ heel turn on John Cena, skipping over their forgotten Money In The Bank 2016 match to go right to their first classic encounter at SummerSlam 2016, where Styles got his first marquee victory in WWE.

Disc Two begins at the start of the most recent WWE brand extension, which saw Styles head over to SmackDown Live. It would not take long for him to begin his dominance of the Blue Brand, as The Phenomenal One wins his first WWE Championship against Dean Ambrose at Backlash 2016. Styles would go on to feud with The Lunatic Fringe over the title for the rest of 2016, culminating in their crazy Tables, Ladders and Chairs match at TLC 2016 which demonstrated their hatred for each other, although interference by James Ellsworth throws things off a touch.

Styles’ first reign with the title comes to an end with another classic with John Cena at Royal Rumble 2017, which gave Cena his WWE-recognised record-equalling 16th World Title reign, but this was an incredible performance by Styles in what was regarded as the best main roster match of 2017. Cena and Styles met again on the February 14th 2017 episode of SmackDown, but by this point, Cena had lost the WWE Championship to Bray Wyatt, so the two challenged the Eater of Worlds in a great Triple Threat bout in what was by far the highlight moment of Wyatt’s lacklustre title reign.
Styles then began a rivalry with SmackDown Commissioner Shane McMahon over what was perceived as a lack of respect, leading to their bout at WrestleMania 33 in Orlando. Styles and McMahon engaged in a fun weapons brawl which set a pace that the rest of the card struggled to live up to, and not long afterwards, Styles turned back babyface after having earned McMahon’s respect. The final bout on Disc Two saw Styles welcome Sami Zayn over to SmackDown Live as part of the Superstar Shakeup on the April 11th 2017 episode of SmackDown, in another fun Triple Threat match also involving Baron Corbin, which made Styles the number one contender for the United States Championship.

Disc Three begins with a fun TV bout against Chad Gable on the July 4th 2017 episode of SmackDown, three days before Styles would win the United States Title from Kevin Owens at a Madison Square Garden house show. Styles lost it back to Owens by accident at Battleground 2017, but two nights later, Styles wins it back in a Triple Threat match on the July 25th episode of SmackDown which also includes his old rival Chris Jericho. The rivalry with Owens over the summer of 2017 didn’t have the killer matches fans hoped it would, which is why it does not feature heavily in the collection.

By November 2017, Styles had lost the US Title, but would surprise fans by claiming his second WWE Championship against Jinder Mahal at the November 7th episode of SmackDown in Manchester, marking the first time in the over 50 year history of the title that the WWE Championship had been won outside of North America. It also began a year-long reign with the title that Styles still holds as of the release of this DVD collection and the publication of this review. The title win set up a Champion vs. Champion showdown with Brock Lesnar at Survivor Series 2017, where Styles put on the best one-on-one bout with The Beast in the last couple of years, despite ending in defeat.

2018 began with a rivalry against Shinsuke Nakamura, following The King of Strong Style’s Royal Rumble win. Their WrestleMania 34 bout in New Orleans was billed as a dream match following their classic at New Japan’s Wrestle Kingdom 10 in 2016, and while this bout was very good, it failed to live up to their Tokyo Dome showdown. Nakamura turned heel on Styles following the match, setting up a series of matches throughout the summer, culminating in their Last Man Standing Match at Money In The Bank 2018 which did a great deal to make Nakamura look good in defeat, and make Styles look strong as champion. The collection unfortunately cuts off before Styles’ current rivalry with Samoa Joe, with the last match being a very good TV bout against Andrade “Cien” Almas on the July 17th 2018 episode of SmackDown.

Most hardcore AJ Styles fans will own the various collections of his matches issued by Ring of Honor and Impact Wrestling, and will have access to New Japan World to see his legendary NJPW bouts, and “Most Phenomenal Matches” will sit along nicely with those collections. As Styles heads towards the tail end of his career, “Most Phenomenal Matches” demonstrates that he certainly isn’t letting up into his early forties, and that his WWE run is more than a match with what he accomplished earlier in his career.

You can purchase this great DVD set right NOW over at https://wwedvd.co.uk/
Posted by WrestleFigsUK at 21:54 1 comment: