Repackaged For A Reason By Stel (@Che_Stel) 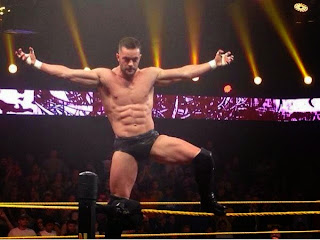 With the entrance video containing Devitt's new name barely mastered, numerous fans were flying off the handle and frothing at the mouth in disgust at WWE creative’s “unimaginative” decision.

“How dare they fix something that isn’t broken” was the general, asinine view from internet keyboard warriors, who were (predictably) up in arms.

I agree “Finn Balor” doesn’t have the same ring as Prince Devitt, but what does it matter? It’s just a name. A moniker. A brand new identity. It’s hardly a disaster of Sampson proportions, is it?

Removing Fergal and replacing it with Finn doesn’t mean he won’t be able to pull off a double foot stomp.

Swapping Devitt for Balor probably won’t slow him down, or drain every last ounce of strength in him. It’s just a name. Deal with it.

The impertinence and lack of logical thinking of some wrestling fans truly astounds me. Yes, people are entitled to their opinions, but at least give the character a chance before reacting in such a childish manner.

A few things came to mind when I heard about the anticipated re packaging of Devitt.

Firstly, taking on the Finn Balor identity should mean he’ll no doubt get to keep the “Prince/Fergal Devitt” naming rights. If this is the case, this is a very intelligent move from a business standpoint.
Let’s say Fergal is future endeavoured somewhere down the line, then what? OK, he won’t be able to run with Finn Balor in the indies/Japan/TNA/wherever, but Prince Devitt is his. No one can take that away from him. Not HHH, not Stephanie, not even Vinny Mac.

Then there’s “the method behind the madness”, being the rational and (in my opinion) genius thought process behind Balor.

Hands up if you actually know much about Irish mythology. No?

Neither did I. That was until I heard where the name Balor originates from. Truth be told, it was quite a surprise to discover how sinister and methodical Balor - king of Fomorians - actually was.

The WWE did their research with this one and when you look at the bigger picture you might just agree that they've unearthed another gem of a character.
Here are a few things that have sprung to mind.

Due to copyright laws, Devitt clearly won’t be able to get all (fancy) dressed up as famous fictional characters. Nevertheless, as Balor, there is no doubt in my mind that the body paint will remain – not as movie characters, but numerous designs which depict and reflect the dark personality of this mythological creature.

Anyone who has seen Devitt on a regular basis may agree that his facial expressions and mannerisms aren’t exactly face-like.

I for one have no problem with the name change, nor am I wary of how he'll be positioned.

Wrestler characters have been repackaged/recycled for decades, as have gimmicks. Granted, some have been buried faster than you can say Phantasio, but did anyone complain when the Dingo Warrior, Ringmaster, Rocky Maivia or (more recently) Husky Harris characters were shit canned? Didn't think so.

Here's another thing. If Devitt's in ring name was, I don't know, Paddy McNamara and was changed to Finn Bolar, would people still lose sleep over it? Same goes for other repackaged guys like Kenta, PAC and El Generico.
Again, I cannot stress this enough - it's just a name.

I'd understand all the butthurt if Devitt was on top in somewhere like WCW for 5-10 years, then being completely revamped in the WWE, because it would be almost as if they're disregarding his past achievements.

Of course the name change doesn't just benefit Fergal's future development.
Imagine the volume of WWE Mattel figure sales of a villainous character, who has numerous styles of body paint.
Think of all the Cena shirts that have been sold. I'm pretty sure there's been a "Hustle, Loyalty, Respect" release for every colour of the rainbow. You think no one in their marketing department hasn't thought of this already? Come on!

I believe that this new character is a future monster heel and could maybe, just maybe have a similar effect like the Undertaker did when he first appeared on our screens.

Remember, Taker didn't talk until his mic and promo skills were ready for TV, so don't be surprised if we hardly hear Balor speak for the first year or so.

The only worry I have for Fergal is whether or not he can get over with the American fans.

Audiences in rowdy, intimidating, cities like New York, Detroit and Chicago will appreciate Fergal because of his in ring ability, persona and aura. It also helps that a lot of these fans are smark, who are part of the IWC and know who he is.

However, its the smaller cities where he may find it difficult to get over (at first) because they're more invested in guys who are on TV more.

Ultimately, what it boils down to is merch sales and crowd reaction.

I guarantee the WWE Europe shop will sell out of Balor TShirts in no time. They may be even more popular in the Irish communities Stateside.

All in all, I wish Fergal the best of luck out there and hope he's a huge success.
Having spoken to many people who have known him for many years on a personal level, they haven't got a bad word to say about him.

Its always nice to see good people do well, especially in such a tough industry.

Posted by WrestleFigsUK at 22:59 No comments: