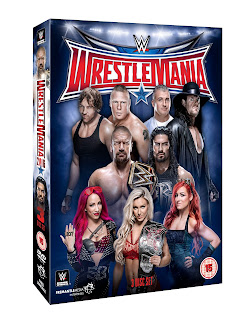 This was the biggest and most successful Wrestlemania of all time from a commercial point of view but for those watching live it was widely considered to have been a bloated show that dragged badly at the end.
A DVD release gives a golden opportunity to put things into context, was this really as bad as the forums were saying? The answer to that is No, though some of the criticisms are certainly valid.

It's fair to say that this Mania did not have the classic match which generally makes fans nostalgic to a particular event. Nothing in the calibre of a Bret vs. Austin, Shawn vs. Razor, Savage vs. Steamboat or even Brock vs. Reigns from the previous year.

The two most pushed matches of the show were The Undertaker vs. Shane McMahon and Triple H vs. Roman Reigns were unfortunately badly booked and with no real idea of how they would actually come across to the live crowd.

It was a terrible idea to give the Hell in a Cell match not including entrances over 30 minutes. Although the crowd cared at the start it became clear that they were losing steam and yet the smart move of wrapping the match up was ignored.

In time Shane's dive from the top of the cell may be re-packaged as the greatest Mania moment of all-time but live it was nothing of the short. The story itself wasn't helped by the fact that the fans didn't want to see either guy lose and the storyline as since has proved we shouldn't have cared anyway.

Triple H vs. Roman Reigns does benefit from the DVD treatment and not having to watch over 6 hours (including the pregame) to get there. Hunter wants his moment has a Wrestlemania main eventer, but this was similar to his Randy Orton match in that he failed to see how burnt out the crowd was. Here it was even more noticeable in that the live crowd did not want to see Roman win. It's not a Mania classic but it is better than you probably remember.

The early matches actually indicated that this could be a really good show, the 7 way Ladder match was a highly entertaining way to kick things off with particularly Kevin Owens and Sami Zayn standing out, though everyone had their moment to shine. In the end Zach Ryder got his very brief moment in the sun and Kevin Owens selling at the end was so good I thought he was seriously hurt.

That though was MOTN, the women's three way was also a contender for the MOTN honours and delivered an entertaining match but felt a bit hindered by the fact that everyone live wanted and expected Sasha Banks to have won.

Speaking of suspect booking decisions leads us directly to Chris Jericho beating AJ Styles which made even less sense when we realised that Styles would main event the next 2 PPVs for the World title. The match was good but not great.

Falling also into that category was Dean Ambrose succumbing to death by German Suplex at the hands of Brock Lesnar. I liked this more than a lot of fans but I do understand the criticism of how this match has done nothing for the career of Dean Ambrose.

Arguably my biggest complaint is the use of former legends to basically steal the show. The New Day although over with the live crowd were put clearly in their place by Mick Foley, Shawn Michaels and especially Steve Austin. 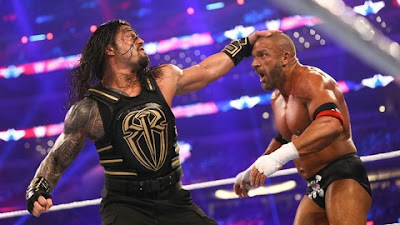 The Rock also got into the act in a segment that really wasn't needed with the Wyatt Family especially that late in the show, also featuring a cameo from John Cena.

Rounding off the Mania experience was the Andre the Giant Battle Royal which included a surprise appearance from Shaquille O'Neal. Just imagine that the WWE wanted to keep Shaq on the quiet.

The three pregame matches are all included and are perfectly fine in their spot although they don't add a great deal. Special note of acknowledgement to Lana's outfit in the 10 person Diva match though.

As well as the show itself we get the Hall of Fame 2016 event in which the highlights include speeches from The Freebirds, Michael Hayes is especially good and you won't believe how Jimmy Garvin has aged.

Sting is a worthy main attraction but he is outshone by a tremendous introduction by Ric Flair that is a particular highlight. Stan Hansen gives a nice speech as well and the HOF is a decent enough addition to the set.

As an event it doesn't deserve the criticism that was heaped upon it and it's nowhere near the worst Wrestlemania of all-time. It has a number of strong and entertaining matches and the biggest issue of watching the show live isn't an issue at all on DVD. It might just be time to re-evaluate the biggest wrestling of the year.

For European customers you can buy the Collectors Edition HERE
Posted by WrestleFigsUK at 15:23 No comments: