WWE Hell In A Cell 2015 DVD Review By Nathan Hunt 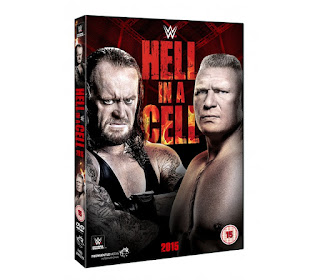 WWE are set to release the Hell In A Cell pay-per-view from 2015 on DVD, the seventh event to bear the name since WWE began the custom of theming shows around their biggest attraction gimmick matches. Since the inception of this policy, the PPVs and titular matches have been a mixed bag, varying from excellent to terrible and contrived outings. This has led some to call for these themed shows to be dropped and the attraction bouts to be used more sparingly, rather than shoe-horn otherwise forgettable feuds into high-profile situations. At other times, everything has come together to create something special, with memorable bouts and feuds coming to a dramatic end, but would this be one of those times? With the Cell match itself being used as the blow-out to a deserving feud between two future Hall Of Famers, plus a good helping of other feuds and storylines to go at, it seemed likely (on paper, at least) that the show would be one of the success stories of the match-themed-PPV genre.
The opening vignette mainly focuses on the main event for the show, pitting Brock Lesnar against The Undertaker, setting the scene for the two to wage a war of biblical proportions to close the book on their epic feud. Opening the show is John Cena's US Championship open challenge, which sees the (very surprising, at the time) return of Alberto Del Rio. Del Rio's appearance gets a great crowd reaction and sets the audience alight for the action to follow. The two are obviously very familiar and comfortable with each other, having feuded on and off throughout 2011-2013, including some memorable matches (like the excellent Last Man Standing war from 2011). This outing is largely dominated by the returning Del Rio and serves as a showcase to re-introduce him to the fans, who WWE always assume to have a short memory. It is well executed, smooth and overall a good way to start the card. It is then onto the first gimmick match of the night as Bray Wyatt battles Roman Reigns in Hell In A Cell. This is one of those feuds which critics would argue should not have been inserted into this type of match, arguably devaluing or overexposing the gimmick of the Cell, but regardless, the match is a very good one. While the feud overall felt contrived, the action and creative offense on offer make this surprisingly recommended viewing. Starting pretty slowly the match picks up in intensity as it goes on, incorporating some weaponry and brutal-looking striking to create a suitably violent spectacle to justify their billing inside the structure. The creative use of the kendo sticks is a particular highlight.
We are then treated to a very entertaining Tag bout between The New Day and The Dudley Boys and a very strong match between Charlotte and Nikki Bella. Both are very watchable and keep the action varied, ensuring that there is no lull in the quality while each offering something different from the marquee matches on the card. It is then on to the WWE World Heavyweight title contest between Kane and Seth Rollins, followed by an Intercontinental title bout between Kevin Owens and Ryback, which are both extremely average. Both matches are predictable and lack drama, so while the action is fine, there is no real reason to revisit this section of the disc.
Finally it is on to the main event, pitting Undertaker against Brock Lesnar in the second Cell match of the show, and second one in their storied rivalry. The first Hell In A Cell match between the two in 2002 was a classic, despite being the first of it's kind where the competitors did not exit the structure for some death-defying bump. This one was, in my opinion, even better than the first. Although certain spots came under scrutiny and criticism - such the allegedly intentional bloodshed and the ripping up of the canvas to expose the wooden boards on the ring - I thought that these helped the match, emphasising and illustrating the danger and brutality that the Cell's mystique is built upon. Power moves, striking, the use of the stairs and the cage itself all added up to a believable and dramatic fight between two genuine titans. An excellent close to a fantastic feud.
The only extra on the disc is the six man tag match from the PPV kick-off show, pitting Dolph Ziggler, Cesaro and Neville against Rusev, Sheamus and Wade Barrett (prior to the official formation of the League Of Nations faction). It would have been good to have the precursor to this rematch on the disc as well to add a little more value to the disc, or perhaps some of the other TV build-up to the show, but this is better than nothing. The six men represent themselves well, with some good spots (like Neville delivering a moonsault to Sheamus off Cesaro's back and Cesaro's running European uppercuts around ringside) and all round decent action.
All in all, the show is a very good one, with only two matches that would be worth skipping through, while the rest is watchable, enjoyable and entertaining. I would recommend getting this title if only for the two Hell In A Cell matches themselves, but the rest is definitely more worthwhile than simply two matches and a load of filler. The women's match and the match from the kick-off show are both better than I remembered and ones that I am glad to have in my collection, while the US Title match is worth re-watching for the sake of revisiting the moment Cena's Open Challenge storyline comes to an end (even if only temporarily) and the crowd reaction for the return of Del Rio. A strong offering with some historic matches and moments, this is one of the best events that WWE has produced this year.

The DVD & Blu-Ray is available in the UK/Europe from WWE Video UK on January 4th, pre order now.
Posted by WrestleFigsUK at 13:07 No comments: 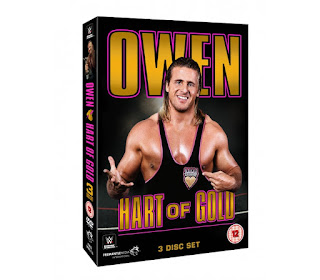 
Obviously we get the WrestleMania X match with Bret, along with a rare Lumberjack match between the two - both of which are excellent and well worth a watch whether you've seen them before or not. The King Of The Ring Final against Razor Ramon and the speech which follows are very entertaining and the second bout with Michaels from In Your House 1996 is a great outing by both. The finals of the European Championship tournament betwen Owen and British Bulldog is fantastic and comes highly recommended to absolutely any wrestling fan, while the ten man bout from the main event of Canadian Stampede is almost like a 'Greatest Hits of The Attitude Era' rolled into one great match. These are amongst the highlights of the entire set, but the quality of action elsewhere on the discs is high throughout, so there is plenty on offer.
This DVD is is a definite must-have for any Owen Hart fans, or for anyone who was a fan in the 1990s in general. It features some outstanding action and is generally insightful and interesting, recapping a very successful career and showcasing the great work of a highly talented individual. The nature of the stories that people tell about Owen are generally very entertaining in themselves and you can see the genuine love that was shared by all who knew him on a personal level. While some more matches from outside of WWE would certainly have been a good move, Owen's most famous work and some of his best opponents are well represented, making this a very decent offering overall. I can't help but feel that a second installment may be necessary, as there are certainly some other matches which deserve to be seen by a larger audience (such as the cage match against Bret, other matches against Shawn Michaels, any matches from his tag team runs alongside Davey Boy Smith or Jeff Jarrett and international matches against the likes of Jushin Thunder Liger and Marty Jones). Even so, whether there are plans for a second disc in the works or not, there is enough here to make this worth the cost and a welcome addition to any collection.
Posted by WrestleFigsUK at 05:58 No comments: