Mistico is Re-Branded For His New WWE Career 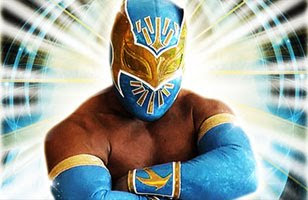 Mexican superstar Mistico (Ignacio Almanza) [Below] has finally been given his new name for his life in the WWE, he will now be known as Sin Cara [Left]. Mistico is a great talent, I have seen him work in the wacky world of CMLL doing the Lucha Libre style an more recently seen him perform for NJPW. I imagine much like former Mexican mainstay and Japanese legend El Ultimo Dragon, Sin Cara will not show his potential in the WWE. I hope I am wrong and he goes on to have a career like Rey Mysterio but I just don't know. One thing is known for sure, Sin Cara has real-life heat with one Alberto Del Rio (Dos Caras Jr.) so we will have to see how they work together if they are to do so. 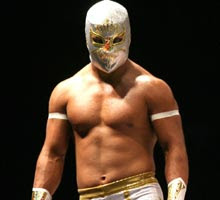 I read somewhere today, do we think Sin Cara might cost Del Rio his World Title chance in his match against the champion at Wrestle Mania XXVII? It's possible of course but who knows what's ahead for Sin Cara, is it the career like Mysterio or the bright looking one Del Rio has or will it be like Yoshi Tatsu where he will be resigned to working on WWE Superstars or even worse, will he be shipped to FCW to learn the WWE 'way'?

All we can do is wait but I hope, Sin Cara has the chance to ply his trade as he has in Mexico & Japan over recent times.
Posted by WrestleFigsUK at 14:48