Looking Back at Wrestlemania - Part One With Shaun Nichols 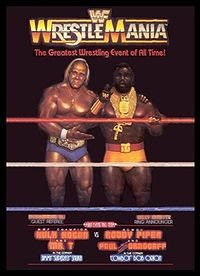 Wrestlemania I - The first Wrestlemania is best described as a celebration of celebrities over wrestling. Among those appearing were Muhammad Ali who despite suffering the early signs of Parkinsons Disease was the second referee in the main event, Liberace, Cyndi Lauper who seconded Wendi Richter in her women's title match and most important of all was Mr T who teamed with Hulk Hogan against Roddy Piper and Paul Orndorff in the main event. The event itself took place at Madison Square Garden on 31/03/1985 in front of nearly 20,000 fans. Unfortunately the event from a wrestling point of view was not a success, Hogan and Mr T defeated Piper & Orndorff in the main event in one of only two matches that went more than 10 minutes. The other was David Sammartino and Brutus Beefcake struggling to a double DQ in 13 minutes. Only one title swiched hands at the US Express were dethroned by the Iron Sheik and Nikolai Volkoff in a poor contest. Among the other results were Andre defeating John Studd in a bodyslam challenge. Although certainly not a classic show, Wrestlemania was up and running.

Wrestlemania II - The second version is the only Wrestlemania to be held in three different cities which were New York, Chicago and Los Angeles. Each part of the show had it's own main event. Los Angeles had Hulk Hogan defending the WWF title against King Kong Bundy, New York had Roddy Piper gunning for revenge against Mr T in a boxing match and Chicago had a 20 man battle royal which was won by Andre. The combined attendance was over 40,000. This time celebrities were less of a feature, boxing legend Joe Frazier seconded Roddy Piper in his match against Mr T which he lost when he bodyslammed the A-Team star, Ozzy Osbourne seconded the British Bulldogs in their WWF tag team title success against the Dream Team (Beefcake & Valentine). Also this was the only Wrestlemania that was held on a Monday, for all you fact fiends. Again there wasn't any classic matches but it was clear that Wrestlemania was becoming the biggest wrestling event in North America.

Wrestlemania III - If you believe the attendance, than this is arguably the most successful Wrestlemania, held at the Pontiac Silverdome in Detriot in front of over 90,000 fans was headlined by Hulk Hogan defending the WWF title against Andre the Giant managed by Bobby Heenan. Although it wasn't a classic by any means it was a match that was a PPV draw and is correctly seen as an iconic match with Hogan bodyslamming the Giant enroute to victory. Wrestlemania III also featured the first outstanding match on any Wrestlemania card which was Randy Savage defending the IC title against Ricky Steamboat in a match which won the 1987 Wrestling Observer Match of the Year. This PPV was the most succesful so far and was the inspiration of the WWF creating the Survivor Series PPV in November so the WWF could continue the Hogan-Andre feud. Among the other matches were the Honky Tonk Man defeating Jake Roberts, Hart Foundation & Danny Davis bested British Bulldogs & Tito Santana and Roddy Piper defeated Adrian Adonis in a hair vs hair match. 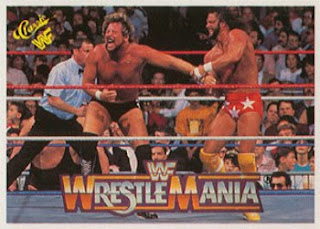 Wrestlemania IV - Came from Atlantic City at the Trump Plaza and featured a 14 man tournament to crown a new WWF champion after the title was held up when the WWF ran a storyline where Andre won the title thinks to evil referee Earl Hebner than trield to sell the title to Ted Dibiase. The tournament itself wasn't great and featured a number of mediocre matches although the highlight of the first round was Jake Roberts and Rick Rude going to a 15 minute draw which was the longest match of the show. The Ultimate Warrior made his Mania debut by defeating Hercules, Demolition defeated the under appreciated Strike Force (Rick Martel & Tito Santana) to win the tag titles. In the second round the big match was a Wrestlemania III re-match between Hogan and Andre which ended in a disappointing double DQ in just over five minutes. Due to Rude & Roberts draw and then the Hogan & Andre DQ it left Dibiase in the main event by getting two byes. In the final he met Randy Savage who had overcome Butch Reed, Greg Valentine and the One Man Gang. With Hogan and Miss Elizabeth at his side Savage won his first WWF title, Dibiase as a result came away as no threat at all going forward. On the same night NWA ran the first Clash of the Champions on TBS which affected the show as a PPV draw, it was also the show that in 45 minutes Ric Flair made Sting a star, something that Wrestlemania IV failed to do for anyone not even Randy Savage.

In Part 2 I'll look at Wrestlemania V-VIII.
Posted by WrestleFigsUK at 09:05