The Rock And John Cena, Where is it Heading? 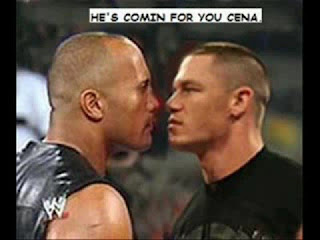 Yes, The Rock is back in the WWE and one thing that came from his come back promo was his heat towards John Cena. Rock announced how Cena had been speaking trash about him over the years and then went onto mock him and the parody of Cena's "You Can't See Me" catchphrase was absolutely hilarious but, where is this actually going?

John Cena, as we all know is THE most popular wrestler in the WWE, mainly with the kids, he sells huge amounts of merchandise and he really is the poster boy of the company. A lot of time has been put into Cena and to give Cena some credit, he has given a lot to the WWE too. I am writing this because I am enthralled at what could be happening with this angle, if it develops at all.

We now know The Rock is going to be the guest host of WrestleMania XXVII but it's niggling at me, why did The Rock do what he did towards Cena? I said earlier above how popular Cena is but for a number of years, Cena has had his own band of haters. Never in his WWE tenure has Cena ever played the role of a heel, could this be just that, the lead up to a heel turn for the 'Doctor of Thugamomics'?

Yes, Cena has never gone down the heel route, is that because the WWE have never thought they have had suitable replacement to be the aforementioned poster boy? I think this  is the reason personally.

The Rock got a huge pop when he came out on RAW and one thing about him, he can so easily play the heel as easily as he can play a babyface. Could, is it possible, it'll be The Rock who plays the heel in this angle if it does go anywhere? I wouldn't of thought so but it's the WWE so you never know.

Apparently, The Rock tore his ACL while filming a movie and was quoted saying his wrestling career was over. But like some others, I think he has maybe one more match in him, be that with Cena or not.

WrestleMania is on the horizon, Rock's return was great and hopefully there's more surprises to come starting with this Monday and 2.21.11 yes, there is a PPV on Sunday but for now the hype for me anyway is about RAW on Monday.