Another Possibility For Who Is Coming On 2.22.11 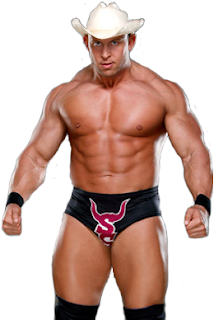 Another possibilty for who is returning to the WWE on 2.22.11, that's if it's not someone brand new to the WWE is the man pictured here on the right, Skip Sheffield. Sheffield who was a part of the first season of NXT and was allinged with the original Nexus before getting injured. Much is being made of the videos that are being aired on WWE TV, the person is wearing cowboy boots, is it The Undertaker once again re-inventing himself or is it Awesome Kong or is it actually Sting or is it Sheffield who as you can see by the picture, is no stranger to a cowboy gimmick.
Posted by WrestleFigsUK at 21:18