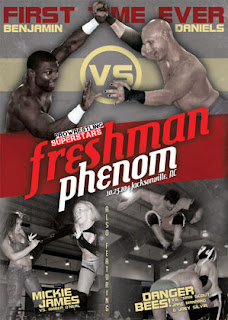 Welcome to Indy Corner and todays show under the spotlight is Pro Wrestling Superstars Freshman Phenom. The show which was held in Jacksonville, NC before a turn away crowd had a mix of locals and former tv guys.

Match 1. Caleb Konley vs. Lee Valiant. An OK match both guys tried but was the type of genric indy match you see from most indys. Crowd were into it which added to match the end came with a outsiders edge by konley on valiant which he held on
to and turned into a walls of Jericho type move.

Match 2. Kevin Michaels vs. Donnie Steamboat. I thought this match started slow and Michaels has a terrible look. Steamboat seemed a OK worker and with another guy could have a good match but this was not one. Worst match of the show and not one I
would revisit. The end came when Michaels missed a moonsault and Steamboat got a cradle for the win

Match 3. “Man Scout” Jake Manning & Joey Silvia vs. “The Danger Bees” El Generico & Paul London and this was my fav match onthe card could be due to the fact im a huge Paul London mark but if you're after great wrestling with comedy spots this will
be up your street. It was a quick match with manning and silva taking control early in the match but Generico and London gettingthe comeback and hitting brainbuster shootin star combo for pin

Match 4. Tommy Dreamer vs. Necro Butcher in a hardcore match when you read that match you pretty much know what to expect and that's what you get before the match cookie of TNA fame came out and cut a promo but I could not hear a word she said because of crowd heat and bad mic but the main thing I think is she is with Necro. They went all over the gym using what they could find as weapons including bins, a toy spinner belt and tables. The end came when Tommy caught Necro on top rope and slammed him off the top onto a chair he then hit a ddt for the win

Match 5. Cedric Alexander vs. Xsiris these were two local guys who put a good match on. Crowd were into it as they were with most things on this show. Xsiris seemed the better of both workers and got the win with a strange looking reverse DDT

Match 6. Shelton Benjamin vs. “Fallen Angel” Christopher Daniels in their first ever match! Now I know what your thinking these two must have had a good match and no suprise they did. The show was built round this match and I was shocked that I'd didnt go on last. Both guys milked the cheers for a few min at the start with them both getting the same level of pop.Daniels played the heel in the match it was a well paced match and would not look out of place as a upper mid card match on a TNA PPV. Both guys hit most of there arsenal and the end came when Shelton hit the paydirt for the win

Main Event Mickie James vs. Amber O’Neal. Really not sure why they put this last it was referee'd by Cookie who seemed to be sided with Amber. Poor IMPACT women level match, more to do with Amber than Mickie. The end came when Mickie hit a chick kick on Amber and Cookie counted the pin not knowing who she was counting out. After the match Mickie gave Cookie a chick kick to end the show

An OK indy which can be bought from highspots.com. Still can't understand why they put women on last, it kind of spoiled the show that being the last thing you see. The next indy corner will focus on CHIKARA's 10th Season Opening show Cahos in the Sea of Lost Souls