Christopher Daniels Back in TNA 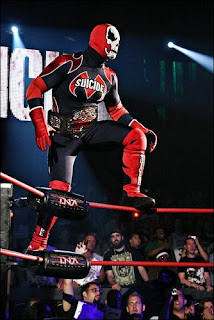 Thanks to our friends over at http://ROHWorld.com I learned that Christopher Daniels has returned to TNA wrestling to ressurect the Suicide character. Originally played by Frankie Kazarian, when he dropped the gimmick it was given to Daniels and then soon after handed to Japanese worker Akira Kawabata who had been working in TNA as Kiyoshi. October 13th 2010 saw the Suicide character profile removed from TNA's website but on January 31st at the Xplosion tapings, the character returned being portrayed once again by Daniels.

Credit to ROH World for the following passage: Many thought the news would signal the end of Daniels’ successful return to ROH but that will not be the case. ROH apparently gave Daniels their blessing to return as long as he did so as the Suicide character. This means that their deal with the 39-year-old will not be conflicted and he will continue working for the promotion.
Daniels won his first ever singles title last week during ROH on HDNet. He beat Eddie Edwards in a very entertaining match to become the new ROH World Television Champion, looking visibly elated after the bout had ended.

“The Fallen Angel” will be looking to kick on from this win after a disappointing loss to fellow former TNA man, Homicide. The two faced off at Final Battle 2010 but failed to live up to their potential as Homicide gained a relatively quick non-title victory.
Daniels may well challenge for the ROH World Championship in the future, but for now, his focus remains solely on keeping his Television Title.
Posted by WrestleFigsUK at 20:57