Earlier this evening while listening to the Total Wrestling Show (banner/link on the right of the page) a discussion came up about the rosters of both TNA & ROH and TWS lead guy Andy Evans stated "TNA has a better roster than ROH". For me, someone who has been a massive ROH mark since it's incarnation in 2002 find this hard to believe. Granted, ROH has lost a hell of a lot of good workers like AJ Styles, Low-Ki, Samoa Joe, Bryan Danielson & CM Punk, I think the 5 biggest names not in ROH any longer and workers like that taken off any roster will be a huge dent in the talent pool but we are talking of todays TNA & ROH.

TNA has the likes of Hulk Hogan, Scott Steiner, Matt Hardy, Jeff Hardy, Ken Anderson, Kurt Angle the aforementioned AJ Styles & Samoa Joe. I am a big fan of both Styles & Joe but not so much in TNA, Joe's best TNA stuff was back in 2005 when he did matches with Styles & Christopher Daniels. And although a former WWE worker and he has had his problems in TNA, Kurt Angle has been overall excellent in TNA. ROH, has a terriffic array of talent, names like Davey Richards, Christopher Daniels, Homicide, Roderick Strong, The Briscoe Brothers, Hass & Benjamin, Chris Hero, Claudio Castagnoli, Colt Cabana amongst many more. 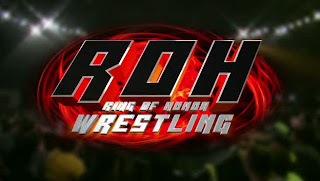 Let's be honest, does anyone seriously think the TNA roster is better than ROH's? The argument will be as it always has, the ROH 'style' wouldn't work in the 'big 2' that being TNA & WWE. I look at it this way, why should that matter, can anyone in the TNA roster have better matches than the likes of Chris Hero? Styles & Joe maybe, but that's about it.

Quite clearly, it doesn't matter if the ROH guys could make that move even though as mentioned earlier on 5 names did make the move to those 2 promotions, Low-Ki actually worked in both. The point I am trying to make is, no way do TNA have the better roster.

DISCLAIMER: This is in no way a personal Knock on Andy Evans.