The Way It Should Go: WrestleMania XXVIII By Jimi James 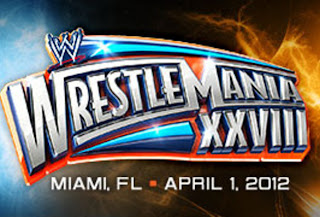 So we know in years past with WrestleMania, fans get their hopes up, casual fans go to their die hard fan friend's house to watch the PPV because they want to see it, and thousands of fans converge on the host city to officially become fanatics. But, there have been times in the 27 other WrestleManias that when the show closes, people say, That was WrestleMania!?!?

I said that very question/statement last year when WrestleMania went off the air. I was left with that empty feeling of not getting a true WrestleMania moment. If The Rock was to provide that moment, he failed. The booking of the matches, the order of the matches, and the inconsequential main event were all filler for Vince McMahon's man crush to come out and "host" the biggest show of the year.

For this year's WrestleMania, my hopes are not up, even though the card is huge. In this piece, I'm going to do what I do every year prior to the event, armchair book it. I'm going to go through the matches that have been made official up to this date. I will put them in the order they should appear on the show and how I think they might (should) play out. Allow me to ruin WrestleMania for you. Ready?

Now, we aren't exactly sure of all the participants, and since Wade Barrett is out, this match should just be used to get the crowd hot. If Barrett was healthy for Mania, this would be a Money in the Bank match in the middle of the card with Wade getting a shine and nudge to begin his future as a main eventer. Now, since it's just a tag match without gimmicks, I expect Rey Mysterio and Alberto Del Rio to be back for this match as the mystery members. The reason I put this match as the opener is because twelve workers in the ring at once is enough chaos to fire up the crowd who will be in awe for the first half an hour of this event and will not be totally focused on the card yet (gotta let the beer kick in). Also, another reason this should be the opener is it gives the angle of who is the sole GM to play out for commentary for the rest of the night. I believe Team Ace wins this. But, the ride Santino has been on lately, I could possibly see him getting the win. But,since Teddy Long has had such a long run as GM of Smackdown, and Johnny Ace is coming into his own with his character, I have Team Ace winning.

All is right with the world when the Intercontinental Title is on the line at WrestleMania. But, this is not a Savage/Steamboat by any means. I have Cody retaining. I believe he will be the one to beat Honky Tonk Man's record for longest IC title reign. Also, Cody as IC champion give the perfect opportunity for a Seth Rollins debut. If you haven't seen the video from the live event with Rollins vs. Cody, search YouTube for it, the chemistry they had in the opening promo is why I want these two to battle throughout 2012 for the IC title. Also, Show winning here does nothing. Who would challenge a new champion Big Show? Don't you dare say Zeke Jackson. The answer is no one, and the IC title would be more irrelevant than it is now. After a cheap win for the champ, I would love a run in by Rollins, but, even I would rather hold that off until Smackdown after Mania, so everyone can see Rollins debut.

I have no idea who Maria Menounos is, nor do I care. As of this writing, Eve Torres is in the match, Natalya is not. So I can do nothing for this match to make it sound better. Maybe a Kharma involvement, but with her private life the way it is, I only want Kharma involved if she wants to be. I am seriously irritated by Natalya not being booked in this match. But, honestly who wants to see the Hart WrestleMania legacy to be continued by a flatulent member of the family? Sorry Nattie, I really want you to be a part of this, but not that way.

Snoozefest Alert! I put this match after the Divas because I care for fans that spent a ton of money to be there live. I want everyone to get to the bathrooms, souvenir and concessions stands with enough time to not miss the important stuff. As fans start getting back to their seats, the saving grace of this match would happen. I would have Zack Ryder do a run in. Zack causes a cheap win for Orton and sets the stage for the unresolved issues with Kane to take shape. Honestly, I would like this match to be dark and on the pre-show so the title matches can have time.

It's time. I don't believe this match will top the match from last year. I love HBK as much as the next mark, but him being the special referee has turned me off for this match. Guest referees take away from matches. Triple H ruined SummerSlam's main event of Punk vs. Cena. I don't think Shawn will ruin this match, but he will take away from it. I want to see Triple H and Taker come close to killing each other in this match. I want both to go out on stretchers. There will be blood. Both paid legit fines last year for headshots with steel chairs. This year, you have to go for the other taboo of WWE, blading. Besides, how else do you get Taker's new bald look over? You cover it in blood. I would like to see a recreation of the Foley leap. Triple H threatens to throw Taker off to finally end the streak, only to have Taker throw Triple H off. It would be cheesy, kind of like Rikishi falling off the cage, but it's the only way I can see this ending. The last few Hell in a Cells have been terrible, this match must resurrect the cage as being the be all, end all for all rivalries.

Yeah, I know this match will probably be the opener, but this is the match I pick as the sleeper for show stealer. I can't say enough, how glad I am that Orton is not involved making this a Triple Threat. Both Sheamus and Daniel Bryan wrestle a strong style and both have old school mentalities to do anything to make this a classic. After being reduced to a dark match last year, this is a true feel good moment. This is why I believe these two will have the fans in the palm of their hands. A true story will be told here. Fans not familiar with these two, will know who they are after this match. Unfortunately, I have to have Sheamus going over here. I say unfortunately, because I would love to see Bryan stay champion. He has done so well with his championship character. But, Sheamus is the babyface in this match and the face of the Be A Star campaign. With Daniel Bryan playing a bully, Sheamus takes the title and quite possibly AJ, too. Besides, one championship has to change hands at WrestleMania, and this is the only change that makes sense.

One thing I can be certain of here is that at some point in the match, Jericho will steal a beer from a fan and try to force Punk to drink. I've heard rumors that Jericho has a lot of things on his plate after Mania and probably won't be a part of WWE after this match. I don't see anything out of the ordinary happening. This will just be a good old wrestling match for a title, which is just fine by me. Casual fans will be disappointed in this match because of the mainstream appeal of both workers and it only being a good wrestling match. I believe this match has all the potential to steal the show, but I just don't think it will.

Match 8: The Rock vs. John Cena

Here we go. But, where are we going? The build to this match has been confusing with The Rock playing weak to Cena. The only thing this has proved is that The Rock has done something no one else could, get Cena truly over with the fans without WWE jamming him down our throats. I was a huge mark for The Rock during the Attitude Era. Back then, I wanted to see The Rock more than Steve Austin. Now, I can't believe I'm going to say this, but I want Cena to win. This match has all the potential for being awful, but hey, all WrestleMania main events with Hulk Hogan were awful, with the exception of WrestleMania VI. So after 5 minute stare down and making fans crazy, they will lock up and do their thing. After two of the worst finishers of all time, the People's Elbow and the 5 Knuckle Shuffle, it will take Miz, to finally end it. Yes, I said it, I am a firm believer that Miz will be involved in this match to get retribution for last year. Miz has not rebounded from losing the WWE title. He has wallowed in the mid-card and got a ton of heat lately for losing his head while working, but Miz still has potential to be a top heel. Interfering in the biggest
WrestleMania match in the history of the universe, would give him proper heat. With that heat, he can become the superstar he aspires to be. No, I don't see Miz interfering on behalf of Cena to lead to that Cena heel turn everyone wants. Cena is a heel now, whether you all believe it or not. No, Miz won't interfere for The Rock either. Miz will interfere for his own benefit, only to draw the right heel heat to build his future.

So who wins? Cena does. Why? Because it's Super Cena. When The Rock was an active full time wrestler, he jobbed to everyone. He was one of the biggest stars because he put over the other stars. Foley, Austin, and even Jericho benefitted from Rock jobbing to them. This whole scenario, I believe, is for WWE to finally shut up the Cena haters and get him over with everyone. That is why Cena wins. If the rumors are true and this match is a start of a three match series between Cena and Rock, I still see Cena winning. It gives Rock motivation to try to redeem himself. He would beat Cena in a not so big second match, maybe at SummerSlam, setting up the rubber match at next year's WrestleMania in New Jersey.

My overall hope for WrestleMania XXVIII is that this "era" ends and a new one begins. Names like Seth Rollins, Antonio Cesaro, Dean Ambrose, and Kassius Ohno (you know I had to fit those names in this piece) can not get over until the names clinging to that dimming spotlight lose their grip. WrestleMania used to be the culmination of lengthy angles to come to a close so new ones could begin. WrestleMania XXVIII should be the springboard for WWE to catapult into the new era we have all been begging for. The veterans of the new era can be Rock (not full time) and Cena (full time). Triple H can recover and be the authority figure, but due to the injuries the Undertaker inflicted, he won't be able to wrestle. Therefore giving new superstars their chance. It's time. The future hopefully begins April 1st.
Posted by WrestleFigsUK at 11:29