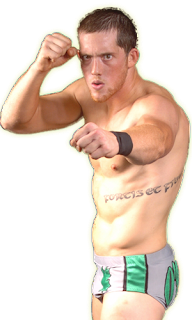 The Indy Corner: So Kyle, before we get onto more current things I’d like to cover the basics, when did you get into wrestling as in, when did you become a fan and who did you like watching growing up?

Kyle: I’ve been watching wrestling my whole life and always knew I wanted to pursue it. Some of my favorites growing up included Bret Hart, Owen Hart, Shawn Michaels, Steve Austin and The British Bulldogs.

The Indy Corner: What made you go from being a fan to want to be an actual wrestler yourself and where did and who with did you do your first training with?

Kyle: I knew wrestling was something I wanted to pursue with the upmost dedication. So right after High school I got 2 jobs to start paying for my wrestling training. I first started training in British Columbia Canada under Michelle Starr, Scotty Mac and Aaron Idol.

The Indy Corner: When you first began training was there ever a point where you thought, is it really worth it?

Kyle: Yeah I loved all the traveling right from the get-go. At first it wasn’t very glamorous. Crammed in a tight car for 16-20-30+ hours, but I knew I was doing something that everyone once had to do to gain exposure. I knew it would all be worth it in the end.


The Indy Corner: So if you can tell the readers, where did you get your first matches, what promotions?

Kyle: The first promotion I worked for was the same one I was trained out of based in British Columbia. ECCW. Elite Canadian Championship wrestling. I had my first match after about 6 months of training 5 days a week.

The Indy Corner: Do you recall your first match, who was it against and how did it go?

Kyle: My first match was actually a 6man tag match in a cage. They were running an all cage match show, so not too many solid memories of that one. But my first singles match was against a long time friend/rival Sid Sylum. It was good from what I recall (which means it was probably the shits if I watched it now)

The Indy Corner: How did you get your break in ROH?

Kyle: I always knew I wanted to end up in ROH, it was somewhere I really wanted to be. I had become friends with Davey Richards and when the chance came up to move to St. Louis and pursue training with him and traveling with him more I jumped at the opportunity. From then I began getting myself to ever ROH show possible, working dark matches and losing money for about a solid year before I was finally signed to a contract

The Indy Corner: We understand, Adam Cole and yourself arrived in ROH around the same time, he has spoke about how you were thrown together but can you tell us, how were you with this at the time?

Kyle: Yeah, they kind of just put us together as a tag team as a way to avoid shoving these newer guys down people’s throats. With the hope we’d gradually get over and go from there. Luckily we meshed really well together and were given some great opportunities to shine.

The Indy Corner: We’ll go back to ROH in a bit but I want to now talk about your travels over here to the UK and Fight Club: Pro, I believe you worked there twice, if you can, tell us about your experiences in FCP.

Kyle: I truly enjoyed my time working with Fight Club Pro. Just a great, genuine group of hardworking guys and girls that truly believe in the product they are providing. Can’t wait to get back over there for them!

The Indy Corner: Any idea if you’re coming back to FCP in the future and if you’re not sure now, would you like to?

Kyle: Yes, would love another shot to wrestle there.

The Indy Corner: Also in the UK, you worked for IPW-UK along with Adam where you faced The Leaders – Zack Sabre Jr. & Marty Scurll, tell us about working with these guys please.

Kyle: Zack Sabre Jr. and Marty Scurll are two of the hardest working, legit wrestlers in Europe in my opinion. They are extremely talented and we’ve always had great matches with them.

The Indy Corner: You also worked the guys in WXW in Germany, tell us about working for the company and working in Germany as whole.

Kyle: Working in Germany was a surreal experience. The atmosphere was simply electric and the fans were so generous to us in all of our matches. I really enjoyed working for WXW and would go back in a heartbeat.

The Indy Corner: Back to more recent times, you have been getting a few spots in PWG in California, people who listen to The Indy Corner radio show will know I love the match Future Shock had with the Young Bucks back at Steen Wolf and I myself have watched it I think 5 times now, can you give us your take on this match, the Bucks and working in PWG please.

Kyle: Man the Young Bucks are amazing. They are absolutely unreal athletes and when you’re working with guys as talented as them it’s just so easy to gel and create something special. The Crowd at the PWG shows are awesome as well and possibly made that particular match better than it actually was. Thanks for watching man, 5 times? Wow!

The Indy Corner: With Adam you have had some amazing matches as a team, your first iPPV match was against the All Night Xpress, you came out on the losing end in that encounter but what are your memories of the match and being on iPPV for the first time?

Kyle: It was a great experience. I was super nervous, first time on PPV, first time in NYC, opening match. The pressure was definitely on, but we for sure delivered. Kenny King and Rhett Titus are so awesome and I ended up loving the match. It gave us both a huge boost of confidence and also gave the ROH office confidence in us as well.

The Indy Corner: Other great teams you have faced in ROH include The Briscoe brothers and the Kings of Wrestling, what can you tell us about what it was like to face these teams and the guys themselves?

Kyle: The Briscoes and the kings of wrestling are literally two of the best teams in the world, and when you get a chance to wrestle guys at that level it always makes for a learning experience and something to grow from. I’m very thankful for those opportunities.

The Indy Corner: Back to ROH, you have been in the ring with fellow Canadian Kevin Steen a couple of times, what was this like at the time and what are your thoughts on how Steen is going in his career now?

Kyle: Yeah Kevin Steen is an animal. An intimidating guy, and he’s super talented. I’ve liked my matches with him from what I recall, and as far as the direction he’s taking things now, as long as people are talking and tuning into ROH I’m for it.

The Indy Corner: After a long time now, Future Shock is no more and you have now teamed up with your training partner and best friend, ROH world Champion Davey Richards as Team Ambition, so, what was it like for yourself and Adam to go your separate ways after going through so much together?

Kyle: It’s hard to say if we’ve truly gone our separate ways. I still think Future Shock has unfinished business, to say that’s as partners or opponents is what remains to be seen.

The Indy Corner: This weekend, with Davey you take on Adam & Eddie Edwards in the main event of ROH’s 10th Anniversary show, what’s it feel like being chosen to work in the main event in such a big show for ROH?

Kyle: It means everything to me. This is a huge deal, and I’m so fortunate to be given this opportunity. I can’t wait!


The Indy Corner: What can the fans expect from this match?

Kyle: The fans can expect an absolute war. I go in more depth on the subject of the anniversary show at my blog which you can check out here: http://kfabe.wordpress.com

The Indy Corner: To close Kyle, we just want to ask some questions from the readers of Wrestling’s Last Hope & listeners of The Indy Corner.

Dan Huckle asks: As you are big into MMA Thoughts on how MMA audiences differ from wrestling audiences?

Kyle: I enjoy martial arts of all disciplines. I believe Mixed martial artists are truly the hardest working and trained athletes in the world so why not conform to a style of training that is going to benefit me greatly in and out of the ring. The fans are generally the same I think? Pro-wrestling fans are better though! Not all a bunch of douche bags wearing sparkly shirts :)

Peter Blackham asks: What tag team from the past would you like to face either with Adam or Davey?

Kyle: The Hart Foundation or the British Bulldogs with Davey. With Adam the Rock n Roll express or the Midnight Express.

Peter Blackham also asks: What do you think of Kevin Steen saying his mentor Davey Richards cares more about MMA than pro-wrestling and is a Jiu-Jitsu bitch?

Kyle: Well I’d say that it’s not true. Davey’s life revolves around wrestling and he’s dedicated his life to wrestling. Brazilian Jiu-Jitsu is also a legit sport and the fact that we are well versed in it speaks volumes about the level of athletes we are compared to Kevin Steen. Davey is simply just trying to stir the pot and the fact that it’s caused such an uproar is part of the point.

The Indy Corner: To end the interview Kyle, is there anything you want to say to your fans here in the UK and around the world?

Kyle: Can’t wait to return to the UK! And keep supporting ROH and all indy wrestling at all levels! Thanks guys

Thanks again Kyle.
Posted by WrestleFigsUK at 10:09