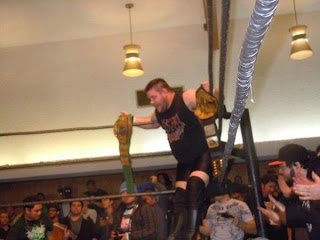 This past Saturday night, PWG held its "World's Finest" show live in Reseda, California. The advertised main event for the weeks leading up to the show was the reigning PWG Tag Team Champions, Kevin Steen and Super Dragon collectively known as Appetite for Destruction facing the teams of The Young Bucks (Matt and Nick Jackson), The RockNES Monsters (Johnny Goodtime & Johnny Yuma) and The Super Smash Bros. (Player Uno & Stupefied). However one day before the event on March 16th, PWG reported on their Twitter page (@OfficialPWG) that Super Dragon won't be able to compete due to an injury suffered during training. This turn of event cause many fans to wonder about the advertised main event. Some predicting that Steen would face the other teams by himself, others hoping that Steen would get a new parnter for the event (Akira Tozawa was a popular choise among fans).

However neither happened last Saturday night. Instead PWG put the three challenging teams (Young Bucks, RockNES Monsters, and Super Smash Bros.) in a three way tag match and Kevin Steen was added to the PWG World Tile match. The scheduled match was originally defending champion, El Generico facing Eddie Edwards in his first title defence since winning the belt from Kevin Steen at Steen Wolf, but before the match started Steen entered the ring and said how he never got his rematch for the belt and was added to the main event at the last minute. The end result of this match was Kevin Steen walking away with his third PWG World Title reign! This means that Kevin Steen is now the holder of both the PWG World Title and one half of the PWG Tag Team Titles.

As a fan of Kevin Steen, I am incredibly happy with Steen winning the World Title since going into the show I thought for sure he would lose the Tag Titles. My hope is that Steen's huge popularity with indy wrestling fans will lead more fans to check out PWG. At the same time, it is a shame that El Generico, agreeably one of the best worker in all of indy wrestling, lost the World Title before he got a chance to hold it for longer or even defend it once. Especially since at PWG's January show, Kurt RussellReunion 3 they teased that Super Dragon and El Generico might have a match down the road, that could still happen but having Super Dragon in the PWG World Title picture would have be cool to see again.

I forsee Kevin Steen and Super Dragon dropping the Tag Team Titles at PWG's DDT4 on April 21st, allowing Steen and Super Dragon to focus on the World Title picture. I am also willing to bet we will see Steen and El Generico face each other again in a PWG ring very soon. Until then we can enjoy the fact that Kevin Steen is now the top dog in all of PWG and hope that maybe we can see the Ring of Honor World Title added to his list of titles in the near future.

Any comments or just to hear me talk wrestling, follow me on twitter @AlexKalil
Posted by WrestleFigsUK at 15:21