I Want To Rant on Cena - By Azan Saigol 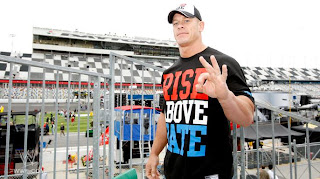 “You have notes on your arm?.. IT DOESN’T MATTER”

These days all people do is Bitch. Seriously, “I want the attitude era back” “why is there no blood” “come back Rock”.. A lot of the internet fans have been complaining. They complained about The Rock not returning and when he does, they start complaining over the fact that he doesn’t appear every week or has notes written on his arm. Really?!? Really?!..

First of all, I would like to start this article by saying that a lot of the “90’s fans” are nothing but complaining bitches. Sorry to say, people do not get that the attitude era is over it is not coming back. Deal with it, I did too. Next they complain about the product offered to them. I mean seriously, I’ve been seeing people complain about Wrestlemania. The card this year is brilliant. You have a hell in a cell, The rock Vs Cena.. What more do you WANT?! Now back to my main topic which is of course the great one The Rock.

For Cena to point out that The Rock had notes written and to say that he “wrestlers for the boys in the back” is a load of bullshit. For five years Cena stole the spotlight from those “boys” Right now, If Cena was never created into what he is today I guarantee Carlito or hell even Shelton Benjamin would be World Champions. Unfortunately Cena always had to go over. People want to say Rock has nothing new to say... lets break it down. The only thing Cena has been saying is: Rock isn't here every week and I am. What else has he said, From there everyone wants to say “what an awesome promo Cena cut”, no it was above average by his recent standards cause he wasn't laughing at the crowd, he said the same thing as he has for the last year. And then people want to hit on Rock for answering Cena about the only thing Cena's talked about and having some fun with the crowd cause no one else can? Seriously, I’d just like to add one more thing, Noticed why Cena isin’t wrestling? Because Vince is scared Cena will injure himself. Cena can’t perform. Just because you don’t laugh and look directly in the camera and say words such as “professional wrestlers” does not make you a badass. I hope Cena looses in Miami.

If you have any opinion or problem with what I said, you can contact me on Twitter
@azansaigol

Thanks! Over and out.
Posted by WrestleFigsUK at 02:48