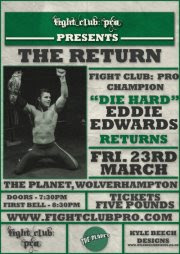 The endorsement for Fight Club: Pro was pretty heavy in the review I wrote a month ago. So excitement builds as the next event quickly approaches. While there is a certain ‘wrestle mania’ in the air at this time of the year, FCP is a local promotion that can keep up with the big boys and is far less likely to disappoint. For the price of five pound, there is very little reason to give this event a miss, but I shall endeavor to convince you anyway.


Clint Margera & A Mystery Partner vs. The Hunter Brothers

The Hunter Brothers were one of the only FCP highlights missing from the last event, taking an absence due to other engagements, but this event will see their return (not ‘The Return’, that’s still to come). The Hunter Brothers, Lee and Jim are both very talented in their own rights and know their way around a ring. They will bring a more pure style which we will see them break down and work their opponents with technique, much like an art form which fans will have no choice but to appreciate. Clint Margera stands opposite from the pair, currently alone but promising to bring a partner with him. Margera duelled with Lee Hunter just a few months ago, and despite being known as a strong striker, he was able to show glimpses of matching the wrestling style of a Hunter brother. Margera’s ability can only improve, and one can imagine he’ll thrive of the challenging opportunity to go toe to toe with such a strong team. As for his partner, one can only speculate, but it must be noted that a certain MK McKinnan is conspicuous by his absence on the FCP card. Never the less, this match will be a great display with fans torn between supporting the popular Hunter Brothers and seeing the likeable Clint Margera escape his losing streak.

While this doesn’t need a paragraph to pitch how good it will be, it’s going to get one. Jonathan Gresham is fresh from his return (still not ‘The Return’, just wait a little bit more for that) at last month’s event, and back in the folds of promotion that loves him. His popularity with the fans cannot be shaken and his in ring ability continues to show why that is the case. Gresham now looks set to make a point, as he breaks away from opponents that parallel his style, so that he can face the dominating force that is Dave Mastiff. The so-called Bastard is currently standing strong on top of the promotion with the momentum that he earned after pinning the number one independent wrestler, Sami Callihan, and shows no signs of slowing down. It’s hard to say what will happen when these two collide, everyone is just sure that they want to see it, safe in the knowledge that two such talented wrestlers could have the match of the night.

A metaphor that explains how much FCP fans currently hate Spud & Williams could not be found, but does make for an amusing discussion. The point however is that the fun and entertaining Spud lost the audiences love when he ruined Chris Brookes’ debut at the last event. Brookes had received the loudest ovation of the night at the previous event and had been embraced by the fans who respected his campaign and determination to get onto the FCP roster. Now Chris Brookes will return (still not talking about ‘The Return’ but don’t worry, it’s very close now) and he’s still craving his opportunity to prove himself to the fans, and furthermore to get revenge on Spud and his companion. Who might his Brookes’ partner be? Well it’s another nice slot for McKinnan to slide into, and some have suggested that Brookes go back to his roots and recruit the girl who works the merchandise stand, but maybe a Dragon will make an appearance. Not an actual dragon of course, one from a faction who has had their dealings with Spud and Williams in the past and saw it’s members unmasked by the pair. Spud & Williams are keen to parade said masks at every oppurtunity, and the Dragons have yet to see revenge. But whoever it is that joins the team, expect this to be a straight up grudge match with everyone in the arena looking for Spud’s comeuppance, and hopefully Brookes’ finest moment.

After leaving with the title several months ago, Eddie Edwards make the return (yes, ‘The Return’) to put it back on the line against the man he took it from. Edwards is a top Ring of Honour star who held the title there and now graces the Wolverhampton arena to show the quality of his craft. Seven was the champion and face of FCP until Edwards knocked him off his pedestal, so for him this match means everything. Seven needs to prove himself to the crowd, his colleagues, Eddie Edwards and himself. But most importantly, he has to bring the FCP championship back home. Stakes like that make this match electric and a hell of a main event for the promotion to hang it’s hat on, but there may be more to the story. After Seven’s confrontation with the aforementioned McKinnan at the last event, perhaps this is where MK will make himself known. Perhaps the young home grown talent will look to make a point in a match of such importance. More than that, maybe fans are ready for a change in the tides at FCP and would be happy to see MK step up to the plate and put Seven down. Never the less, this truly is a huge match which headlines the show and gives it it’s namesake. They are big boots to fill, but one always has faith in FCP and is promised a great match.

It is more than likely that Eddie Edwards will be on hand for signings, photos and any merchandise he might like to tempt you with. Then the bulk of wrestlers themselves will be glad to see you down the pub after the show. You tag these assets onto a great card featuring strong talent, and your journey to Wolverhampton on Friday the 23rd of March is no brainer. Packing five English pounds and taking a trip to the Planet nightclub is your agenda. Hit them up on Facebook or Twitter for any other details you might need.
Posted by WrestleFigsUK at 12:33