Thank You Colt Cabana; The Many Avenues of Wrestling by @DMC316 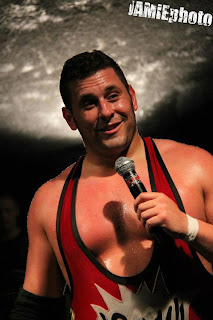 The majority of the projects discussed in this article are by no means new. I am often late to the party and can be found clutching to the side of a crowded bandwagon, pleading to be let on. However, there is a certain amount of confidence that some of the things brought up here will have passed you by as they came out, and therefore you will find yourself linked to a treat or two as you read on. But how does this concern Colt Cabana? Why are we thanking him? Well that’s because his name is synonymous with most of the interesting wrestling projects that have emerged in recent years, and it has become clear that by involvement, the man has made a significant contribution to professional wrestling.

First and foremost is what he is most famous for outside of the ring, ‘The Art of Wrestling Podcast’. If you follow Cabana, you are more than likely aware of his weekly endeavour which consists of him having a relaxed chat with someone from the wrestling community. They are funny, informative, inspiring and always a good listen. They also manage to make you like the featured person in a way that was previously only thought possible by starring in the documentary portion of a three-disc WWE feature. More importantly than all these things, they are long overdue. The fact is that there is an audience for everything, just take look at magazine section of your local newsagents and be stunned that something like ‘Ironing Boards Monthly’ exists. But for some reason, the wrestling audience has always been at the back of the line to get it’s slice of the pie and one can’t help but think that it shouldn’t be that way. Cabana’s inspiration for the podcasts stemmed from listening to the same concept being done on another podcast, with comedians interviewing comedians. He knew that something like this should exist for the world of wrestling and eventually decided to take the initiative on the idea instead of waiting for wrestling to get it’s moment. Eighty-four podcasts later, we can assume that this was a very good idea and if you are not doing so already you can download them on iTunes or listen to them at http://tsmradio.com/coltcabana/. Cabana brought wrestling fans what they deserve and why should it stop there? Now they have a podcast like this, what else can they have?

If the words ‘wrestling documentary’ are said to you, your response will probably be the words ‘Beyond The Mat’, a wrestling documentary from an outsiders perspective that looks in. Without a doubt it’s a great film, but it also enforces some of the negativity linked with wrestling. Following this, wrestling related documentaries dried up until Cabana decided that there should be a film that tells the story of an independent wrestler, coming from the viewpoint of said wrestler. Enter Colt Cabana, fresh from his short run at WWE. Enter Bryan Danielson, fresh on his way to WWE. Enter Sal Rinauro, the friend they just like having around with them. Thus commences a week in the lives of a few independent wrestlers from the trials and tribulations to the good times, and all the while the subjects tell it like it is. ‘The Wrestling Road Diaries’ as the documentary is called, is a truthful insight on what goes into being an independent professional wrestler on a full time basis. And despite all the troubles that go along with this life choice, the stars never complain and continue to approach their first love with positivity. The quality of this documentary is not in doubt, the link is here http://www.wrestlingroaddiaries.com/ , and a select preview is below. For those who have already seen ‘The Wrestling Road Diaries’ you’ll be happy to know that ‘The Wrestling Road Diaries 2’ featuring Luke Gallows and Cliff Compton is being filmed this very week.

Wrestling podcasts, wrestling documentaries, wrestling sketch shows; It’s beginning to look as though anything with appeal can be taken and applied to wrestling. The fact becomes that there is no reason why people shouldn’t find a medium in which something they love can be shared and enjoyed by others alike. Any MST3K fans out there? Mystery Science Theater 3000 is a little television show that you can often be linked with the word genius. On screen it displays some of worst and weirdest movies that have ever been made and at the bottom of that screen are the shadows of three characters, as though you are sitting behind them in a cinema. The premise of this show sees these characters make fun of the movie in their own commentary for comedic effect. This concept has developed into the more recently popular Rifftrax. It’s a cute little idea, and imagine if you could get some funny guys together to watch the worst that wrestling had to offer and lay down a commentary for the amusement of others. Well Colt Cabana has beaten you to it again. Take a look at ‘5 Dollar Wrestling’, which sees Cabana team with Derosa again to lay a verbal smackdown on some of the worst that wrestling has to offer. The cheap price you pay for this product guarantees you a few gems, and an enjoyable hour or so if your sense of humour aligns with that of Cabana’s. To those who are unaware, ‘5 Dollar Wrestling Live’ is the strongest in the series and available for purchase at http://highspots.com/ or for rent on YouTube, and you are further invited to whet your appetite with the following clip.

What else is there? Another recent emergence of a comedy based around wrestling was seen in the pilot for a sitcom set behind the scenes of the Not-WWE. While this time not headed by Cabana, he does feature in the project along with a few other names you’ll be happy to see. Your search on YouTube should be for ‘Undisputed: Episode 1’ and should be followed by the clicking of the first result which will show a picture of one Mr Mick Foley. Colt Cabana then rounds up his comedy antics by trying his hand at stand-up comedy. Others like Rob Van Dam have also tried this path, but perhaps most recognised is Mick Foley’s recent dive into the world of stand-up. The jury is still out on the success of it, but the very idea is exciting enough. There are jokes that everyone can relate to and enjoy, but when a collection of jokes come along that are only funny to you and others in your circle, the comedy feels much more special.

There’s more still if we let go of the Cabana connection. Wrestling comic books exist, so you may want to put ‘Headlocked the Comic’ on your list of things to buy. While nothing new, wrestling autobiographies are still a popular delicacy too. It was also just a few years ago that wrestling broke into Hollywood with credibility, which saw ‘The Wrestler’ made as an Oscar worthy film. Furthermore, it’s exciting to hear that Jamie Kennedy has now teamed up Cabana to help distribute more wrestling movies and projects. I am certain there are even more projects by people that I have yet to discover, and if there are any you would recommend, please share them.

The more poignant question this article aims to bring up, is what don’t we have? Why not novels set in the world of wrestling? I know I’d like to read them, I’d even like to take a shot at writing them. Continuing the theme of what I’d like to do, while sitcoms are all well and good, I have an idea for a wrestling drama. Imagine the great storylines you could develop from backstage politics and wrestler’s lifestyles. These days I see an idea and think, why not do it with wrestling? Cabana shows evidence of following a similar mantra and that is why I thank him for everything he has given to the wrestling community. But I know it’s not just me and him out there, and more importantly, this way of thinking is now planted it in your head. Wrestling is what you love, so why not find a way to share it?

What would you do with wrestling?
Posted by WrestleFigsUK at 11:32