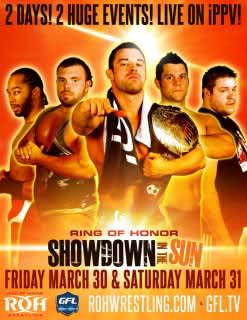 Thanks to Kyle Patin of iNeedWrestling.com for providing these results.

* Jim Cornette introduced NWA World Heavyweight Champion Adam Pearce. Pearce cut a promo on beating Adam Cole last night at an NWA event. Cornette noted that Pearce won with a piledriver, which is illegal in ROH. Pearce said the sign last night the sign didn't say ROH, it said NWA. Adam Cole came out and said he was challenged last night, but learned he could beat Pearce if he had another chance. They agreed to a match right now, non-title.

(3) The All Night Express defeated The Young Bucks in a Tornado Tag Match. Titus attacked from behind with a rollup victory. Post-match, Nick hit Titus with a chair on the knee that Titus recently injured. King grabbed the chair and chased off the Bucks.

* Prince Nana, RD Evans, and Tomasso Ciampa came to the ring. Evans said they had been served with a letter from ROH saying that if Ciampa didn't return the belt within 24 hours, all of the Embassy could be suspended. He said that they were already in Florida when the papers were delivered, so Ciampa didn't have the title with him, but they will have it for tomorrow's iPPV.

(4) Jay Lethal defeated Kyle O'Reilly to retain the ROH World TV Championship. Ciampa was at ringside during the match. They traded strikes and Lethal hit a superkick on a kneeling O'Reilly. He followed with the Lethal Injection for the win. After the match, Lethal and Ciampa looked each other over. Lethal wanted him to get in the ring, but Ciampa slammed his chair down and took off.

(5) Wrestling's Greatest Tag Team defeated Cedric Alexander and Caprice Coleman. WGTT attacked during the handshake. Benjamin ran in and pushed Coleman into the ropes to knock Cedric onto the turnbuckle. Benjamin jumped tot he top and hit his throw for the pinfall .

(6) Mike Bennett (w/Maria) defeated Lance Storm. Storm tried for a superplex but Maria held onto Bennett's leg to stop it. Bennett punched out and hit a side slam from the second rope for a near fall. A frustrated Bennett hit the F6 for the win. After the match, Bennett shook Storm's hand, but then hit another side slam.

(7) Kevin Steen defeated El Generico in a Last Man Standing match. Steen setup for big swing with the chair, but Jimmy Jacobs ran out and stood between both men. Generico took down Steen and Jacobs handed Generico a chair, but reached in his coat pocket and pulled out the spike. He hit Generico with it and then ripped his shirt a part. Steen gave Jacobs a chair and Jacobs knocked Generico out or a Steen win. After the match, Steen and Jacobs celebrated.

(8) Davey Richards defeated Roderick Strong (w/Truth Martini) and Eddie Edwards in a Triple Threat Elimination Match to retain the ROH World Championship. Strong rolled up Eddie about 18 minutes into the match for an elimination. Davey hit a superkick on Strong and a spinning kick to the side of the head. Davey rolls him to his back and covers for the pinfall victory. After the match, Michael Elgin attacked Richards and Truth Martini cut a promo saying Eglin would win the World Title tomorrow.
Posted by WrestleFigsUK at 20:53