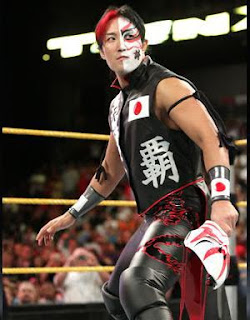 Remember the glory days of wrestling, back in the 90s and early 00’s when Japanese stars like Yoshihiro Tajiri, Shoichi Funaki, Masato Tanaka, Jushin Thunder Liger, Dick Togo & Ultimo Dragon came across to the major US promotions to put together solid runs against the top US and Canadian stars of the Era. They put their style against the best of the America, and opened the eyes of millions to a new form of wrestling. So it was suprising for many years, for WWE especially to be without a stand out Japanese star, to bridge the gap between their market and the Japanese market. That was until mid 2007 when a hot young prospect came to the USA, following building success in NJPW. Straight out of the New Japan Pro Wrestling Dojo, Naofumi Yamamoto was a hungry young competitor with a desire to succeed. After success in the respected Young Lions Cup, he was signed to a WWE developmental deal and given the name of Mr Yamamoto, eventually evolving into Yoshi Tatsu.
Now don’t get me wrong, I respect the talent and skills possessed by this fine athlete, and have no doubt he is a competent wrestler. But what I have to ask myself really is, Can Yoshi Tatsu emulate previous success achieved by the likes of the wrestlers named above in the cut throat American wrestling world? In my opinion as a long time wrestling fan, I would have to say the answer is no he can’t, and here are my reasons for this.
1. The industry now, and the Industry of 10 or 15 years ago, is a totally different landscape indeed. Where as in years past, people like Tajiri for example, would compete at the top end of cards, for world titles or at least titles in general. The Japanese superstars of previous years, would receive the push because fans craved to see their new style every week and were sent home unhappy if they didn’t. Difference now is, the style which these Japanese guys broke onto the scene within the 90’s, is now widely available from many American stars and therefore people are not left wanting. This means the style of wrestling used by Yoshi Tatsu, or comparably Kazuchika Okada in TNA, are not in such demand anymore and this means a lack of opportunity for them to progress through the company.

2. A lack of legitimately available titles to Tatsu is also a prime reason why I believe he cannot emulate the success of previous Japanese stars. Where as in the days of Ultimo Dragon or Tajiri there were opportunities for titles like the cruiserweight or TV championships, which at their peak, were 2 of the most popular divisions of ECW / WWE. It was divisions like this which offered International stars a way to bed into the American industry without being pushed to the world title too soon. Now without these titles, and with the IC and US titles being contested amongst a small group of competitors, it once again leaves people like Tatsu with little to legitimately aim for.

3. The select band of superstars at the top of the WWE ranks currently means it’s hard for Tatsu to make a breakthrough in the company anymore. When he is relegated to competing on NXT, which as successful as that has been, let’s not lie to ourselves when we say it’s a downgrade show because its internet only. When the top stars like Cena, Orton, Edge, Christian, Sheamus, Punk are constantly at the top, it was always going to be difficult for Tatsu to make an impact, proved mostly by the fact he has been moved from ECW to RAW to Smackdown in 3 drafts, and made no real impact on any of those shows. Not that it’s his fault, I mean he can only wrestle the matches he is provided, vs. the competitors he is given, but it just seems that with the layout at the moment, he will be on NXT for the foreseeable future.

4. Maybe not to such a high degree as the last 3 reasons, but I do legitimately feel, with the new looks WWE have brought Tatsu back with, they are trying to tap into a kind of Great Muta look, and I don’t appreciate the way the WWE feel they can just use that well known look to try and boost an if were honest stagnating character. I mean I understand that Muta is known world round, and that he is a famous wrestler from Japan, but that doesn’t mean that they should plaster his look on a Tatsu, who is nothing like the legend that is Muta.
I don’t want people to think that I’m against Yoshi Tatsu from this article, I’m far from that, totally respect his talent and his will to succeed. This is more me just being realistic in his chances of becoming a breakthrough star within the company, and judging him against the previous Japanese superstars to have graced the WWE / F.
But you know, as long as his career with WWE goes on, with this limited success, you have to wonder, if the famous “Future Endeavours” line is around the corner. I hope it isn’t, and I hope I’m wrong and that Yoshi Tatsu is a name which catapults into the title mix sooner rather than later within the WWE. Good luck To Yoshi Tatsu.

Hit me up on twitter @WholeKirknShow
Posted by WrestleFigsUK at 13:37