For or Against: Hogan vs Goldberg on Nitro With Matt Husson & Shaun Nichols 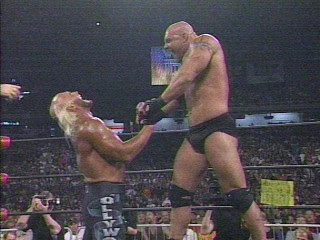 Matt Husson: (For) Granted Hogan vs Goldberg could have been one of the highest earning PPV’s in WCW’s history! They weren’t looking for a one off pay day, they were looking long term! Held in the sold out Georgia dome in Atlanta (The home town of Goldberg’s American football playing career) Goldberg beat Hogan clean to become the new WCW Champion and in turn helped the match draw a 6.91 rating for the quarter-hour, the highest rating recorded in the ratings war up to that point! Not easy considering Steve Austin had only just beat Shawn Michaels for the WWF title two weeks prior at Wrestle Mania XIV. Holding the title match on Nitro was a deliberate tactic to draw both fans away from the WWF and the casual wrestling fan over to WCW. Not something you could expect to happen if the match were to be held on PPV. In today’s terms that would be like asking a UFC fan to buy a Strikeforce show. Not everyone has the luxury to buy both shows at $40(?) a pop so you stick to what you know! Also, let’s not forget the heavily hyped Starrcade from the previous year. You know the one that was supposed to be the nail in the WWF’s coffin! But after the atrocious ending (The fast count that wasn’t a fast count!) all but killed the fan’s faith in WCW’s PPV’s which is well documented in the PPV buy figures for that time. Nitro proved to be unpredictable and offer something the WWF wasn’t prepared to do at that time, Nitro had an exciting advantage. From the 6th of April till the end of the 1998, the ratings rarely went below 4.0, ranging from 3.6 up to 6.0, staying steady right all the way up to the middle of 1999.

Shaun Nichols: (Against) There is a reason why Sting vs Hogan at Starrcade 1997 was the most successful WCW PPV of all-time by a large margin, it was a match that was bulit over a long period of time and when it came down to it people paid their money to see it. Rather the match was executed well is irrelevant and while I agree with Matt that the match failed, the build up did not. Even though 1998 is seen overall as a year that WCW performed well there is clear signs that the writing was about to be put on the wall, WCW became obsessed with using stars outside of professional wrestling and used such greats as Karl Malone, Dennis Rodman, Kevin Greene, Jay Leno followed by none other than the Ultimate Warrior as PPV main eventers. Goldberg beating Hogan on Nitro is simply down to panic, the show itself drew 39,000 fans before anything was announced such was the drawing power of WCW as a brand at that point. Hogan wanting to impress Turner execs wanted to face Goldberg in a dark match where he would lose in front of such a large audience confident that they would believe that it was Hogan that drew the crowd even though that was false. Infact once that WCW announced Hogan vs Goldberg would take place they sold a mere 2,000 extra tickets so well short of a sell-out. Bischoff running scared of the WWF now benefiting from Steve Austin, felt that he had no choice but to put Hogan vs Goldberg on TV. Yes it popped a great quarter rating but in a matter of weeks counted for absolutely nothing. WCW fell behind the WWF when it came for Monday Night ratings, Hogan continued to be the center of attention and although he had the belt, Goldberg was seen by WCW as very much as an afterthought. I must also point out that this match took place more than 3 months after Wrestle Mania XIV so I see that argument as very weak but must point out that because Steve Austin reached his pinnacle by winning the WWF title on PPV it solidified him as a TV draw as became evident in the months and years that followed. Goldberg also would have benefited from winning the title on PPV and so would WCW as they missed out on an easy PPV money. WCW chose to win a weekly TV rating rather than make money and in less than three years they paid the penalty for such a ridiculous strategy which they continued to repeat and they ended up going to out of business.

Hit me up on twitter @WLHSTU as none of the guys have twitter accounts with your thoughts or via email wlhstu@aol.co.uk
Posted by WrestleFigsUK at 05:17