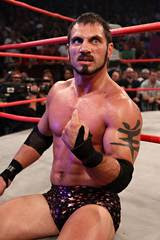 As an avid follower of TNA / Impact Wrestling since its inception, I have seen talent come and go on a regular basis. Back in 2005, current ROH talent Austin Aries debuted in TNA, following an online poll conducted to see who fans would like to see face then X Division Champion Chris Daniels. Aries won by landslide over Jay Lethal, Roderick Strong & Matt Sydal, to set up the match. Aries would stay with TNA for 2 years, culminating in him being released at the end of 2007. Now as was often the way with TNA at the time, Aries was never used to the fullest, and was placed rather far back in the queue as regards X Division talent.
So it was with great surprise, relief etc that Aries returned to TNA in June of this year, competing in and winning the X Division showcase, earning himself a contract with TNA. Now as a long time fan of Austin Aries and an admirer of his work, I think it is only fitting that someone like him is working in one of the biggest wrestling companies in the world, and being greeted by increasing success.
But 1 thing is bugging me about Aries at the moment. I mean don’t get me wrong, he is a great choice as X Division champion, and a phenomenal athlete, but I feel he has the talent to be fighting for the world title, just like he did successfully in ROH. I feel that as long as he stays in the X Division, he is being held back, and that he would definitely open the world title picture in TNA up to levels that we possibly could never have imagined.
For me, Aries carried ROH in the years between Samoa Joe, CM Punk, Bryan Danielson and Nigel McGuiness leaving, and Davey Richards, Eddie Edwards & Roderick Strong rising to prominence. He should in my view be given more of a chance to fight the bigger names in TNA, because as prestigious as the X Division title used to be, it no longer holds the dignity or respect it used to.
If i was TNA, I'd filter through Aries to the world title picture, I mean if Bobby Roode is the next World Champion, then i dare say Roode vs Aries would be a superb match, for a TNA title that needs a few standout matches to put it back on the path to success.
That’s just me opinion of how to push Austin Aries further within the company, whether or not TNA ever push him, that is up to them. But I greatly recommend they do, as it would without a shadow of a doubt improve the reputation of their world title, and give the fans a chance to see double AA put on some awesome matches.

Any feedback, hit me up on twitter @WholeKirknShow
Posted by WrestleFigsUK at 11:15