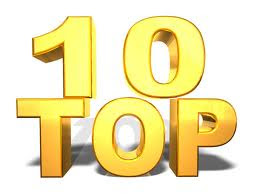 As a child growing up a key part of my weekend was watching World of Sport on a Saturday afternoons and also by enjoying holidays in such tropical delights as Blackpool, Skegness and Scarborough I was also taken to see the wrestling by my parents during those early trips. Watching wrestling live especially as a young boy opened me to a world of wonder. Among the stars I saw were Marc Rocco, Kendo Nagasaki, Marty Jones, Clive Myers, Dave Finlay and unfortunately Big Daddy & Giant Haystacks. I also remember vividly watching the ring announcer going up to the ring and giving a signal to a wrestler, ten seconds both wrestlers ran off the ropes missed one another by a foot and collapsed for a dubious double count out. So I can't say it was always good.
However I do think that I've been lucky enough to see some really great matches and also as given me the opportunity to see some legendary wrestlers perform live so with that in mind let me go through my personal top ten.

10. Mitsuharu Misawa & Narumichi Marufuji vs Kenta Kobashi & Go Shiozaki (NOAH European Navigation 2008) - This match features simply because it gave me a chance to see two legends that I had watched on VHS tapes having classic matches for years. Also I'm a big fan of Marufuji who unsurprisingly did the majority of the really good work, Kobashi and Misawa were several years best anything close to their best and we did get the standard fare of chops from Kobashi and forearms from Misawa. But to me I really enjoyed the chance to see all four of these guys working in front of a very appreciative crowd.

9. Chris Jericho vs Kurt Angle (WWF Rebellion 2001) - This was a UK PPV show from the MEN Arena in Manchester and took place just before the end of the WWF vs The Alliance feud. Although obviously both Jericho and Angle are fantastic talents they also have the benefit of being able to work a standard match without the usual outside interference that marred a lot of the matches in that period. It only went 15 minutes and Jericho won by reversing an attempting Angle slam into a winning roll up.

8. Owen Hart vs Vader (WWF One Night Only 1997) - This like the NOAH match as got picked because it gave me the chance to see a wrestler live who I had been a big fan for a long time. That man was Owen, who I have considered to be a better wrestler than Bret. Because this was the USA vs Canada feud with the Hart Foundation, Owen was a big fan favourite and traded insults with Jerry Lawler to open the show to ensure he was seen as the babyface. He needn't have worried, Vader was in his usual big monster role and Owen got to show off his tremendous skills. Unfortunately Owen didn't get the win but I didn't care, I had seen a really good match and I was still happy that the fans had buried the Patriot earlier on in the show.

7. PAC, BxB Hulk & Naruki Doi vs CIMA & Young Bucks (DG UK Invasion 2009) - From an entertainment point of view, the first DG show in the UK will probably come first. The main event most definitely delivered. The fans were clearly supporting PAC and his team but they way CIMA interacts with the crowd is so entertaining and not forgetting the double team moves of the Bucks which are arguably the best in the business. The main lasted well over 20 minutes when PAC's team got the win. For the record the Bucks did shake hands after the match.

6. Bryan Danielson vs Nigel McGuinness (ROH Unified 2006) - This was title vs title and a part of me expected that we would see some kind of screw job. Surely a match like that would have been saved for New York or Philadelphia. Fortunately this was not the case and the fine people of Liverpool saw one of the best and dramatic ROH main events. Although Nigel was clearly respected by ROH fans in the US but in Liverpool he was very much the hero. Danielson also had his fans and they worked a tremendous match which built the drama up brilliantly with the ringpost spot. It may have gone slightly too long but we got a clean finish and McGuinness came away with probably a breakthrough performance which showed that he could be the main player in ROH.

5. Kensuhiko Nakajima vs Go Shiozaki (NOAH European Navigation: Night 2 2011) - Although a lot of the crowd may have given the MOTN honours to either the Kings of Wrestling or even the KENTA vs Zack matches. For me this was even better, I had very high expectations going into this match. I had seen Nakajima a number of times in ROH and had always been very impressed and Shiozaki had in the last few years became a legit NOAH main eventer (and current GHC champion). This epitomises the strong style with hard hitting moves and very stiff kicks being the norm. They had a 20 minute time limit and as we moved past the 15 minute mark, every big move and desperate kick outs of pin attempts provided great excitement. It finished as a draw and our pleas for another five minutes were ignored although they did work incredibly hard so no-one felt cheated.

4. Shawn Michaels vs British Bulldog (WWF One Night Only 1997) - This was the main event, this WWF show was also the first show I'd seen live for the WWF so I have very happy memories of the event as a whole. The sold out arena were very vocal because Shawn had started DX by this time and he certainly had his fans, Davey was as close to a hometown superstar. This will also go down as Davey's last great match and he always had really good matches with Shawn. I remember hundreds of fans in the seating area on the arena floor all standing on their seats screaming for the favourite. Shawn took the European title thanks to outside interference from Rick Rude. Davey had asked if he could win as he had a member of his family attending who was seriously ill. Shawn in his pre-God days said hell no. Still at least it was an awesome match.

3. Briscoe Brothers, Jimmy Rave & John Walters vs Alex Shelley, Austin Aries, Roderick Strong & Jack Evans (ROH Generation Next 2004) - You could tell I was a massive fan of ROH in 2004 because I went all the way to Philly to attend. The appalling taxi drivers meant that I missed the first two matches but after this 45 minute classic I had stopped being pissed about the earlier problems. The show was held in a tent, the main event of Samoa Joe vs Homicide was only fair. This though was tremendous and was a fantastic way to introduce a new faction. Most of the fans didn't really know that much about Generation Next apart from Shelley who had been a part of ROH for a while. Austin Aries put down an immediate marker, Jack Evans thrilled the fans with an awe inspiring 630 degree splash though he does sound like a girl. The existing stars lost nothing by finally being defeated but Shelley & friends were booked to perfection.

2. Austin Aries & Roderick Strong vs Briscoe Brothers (ROH Unified 2006) - For me this was even better than Danielson-McGuinness, this was billed as the Briscoes finally opportunity to win the belts from the champions. This I think was my favourite match that I saw in 2006 and it stood up equally well when I saw it back on DVD. I'm sure most people reading this have already seen this. So I'll simply say that was a fantasic, dramatic match that again like a lot of ROH matches built to perfection with the right number of false finishes. Awesome match.

1. Susumu Yokosuka vs Shingo (DG UK Invasion 2009) - Occasionally a match will take place which will catch people out. I'm sure quite a lot of people attending wasn't neccesarily expecting a lot. In the early moments Shingo, due to his appearances in ROH was the clear favourite. I was in the minority and was supporting Susumu who I have been a big fan since he used to wrestle as Susumu Mochizuki back in the Toryumon days. Slowly though the fans started to realise that this was going to be a very even match and that although Shingo clearly as the advantage in strength. Yokosuka was more than able to keep himself in the match by the 20 minute mark fans were chanting 'match of the year', they were right and better yet Susumu won. Have to say I took great delight in telling the fan next to me that I knew all along that Susumu was going to win. Good times.

I'm going to the DG show in Nottingham next month and hope that I'll have to change my top ten. Any feedback let me know, cheers.
Posted by WrestleFigsUK at 14:34