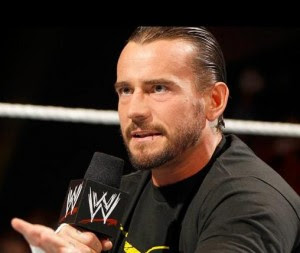 Okay so by now we all have heard about it, seen it on television, watched it countless times on youtube, read about it, posted in forums and on blogs about it. We all have the knowledge of CM Punk's now infamous and illustirous ranting that was 'cut short' by WWE audio guys because he was 'saying to much real life personal shit' about a multi-million, possibly billion dollar company. This one little act skyrocketed CM Punk into the limelight back in June of 2011 during which time he was no longer under contract with WWE, but clearly discussing contract options with them.

Let's tangent a second here. Wrestling is fake. There are stories all over, and in today's modern age we sometimes blur the line between what's real and Kayfabe anymore. This particular angle with Punk and his WWE title theft not only blurred that line, but seemingly erased it altogether.

I digress, CM punk suddenly was a household name. A guy who's been wrestling since the mid to late 90's. Suddenly this guy was everywhere. Even now, I'm sitting here writing about him. A guy I personally passed and overlooked on the basis of a meet and greet one night in the early 2000's where punk proved that he was undoubtedly, (at least to me) an asshole in real life, someone who truly believed his own super ego. Since that day I never truly appreciated Punk, or his wrestling abilities. Now that he's all over the place I can't seem to get away from him, and therefore... I have to speak up. He's getting the push, or at least he was. But what is there I can say about a man who has essentially proven himself to be a dickheaded human being? I can start by saying, HOLY SHIT THIS GUY CAN ACTUALLY WRESTLE.

Okay, so he always could. He was well trained, and "paid his dues" as Bret Hart would say. I admit I overlooked that in him for my own selfish personal reasons, but in today's WW-Cena atrocity, guys like Chick Magnet Punk (yeah that's what the CM stands for, go look it up.) need to be given more spotlight. Unfortunately the way things are going, Cena's 15 minutes of fame are over, and the alarm clock has rung for him. OR has it?

As of this past Monday, CM Punk has been given another title opportunity, this time it is a triple threat hell in a cell with John Cena, and Alberto Del Rio. Del Rio himself, while being in general a mexican version of John Bradshaw Layfield (Which is a horrid angle or gimmick to have), is actually (like Punk) a VERY talented wrestler... at least in this writer's eyes.

CM Punk calls the microphone a pipe bomb, and what he did with that bomb in June was set off a nuclear reaction that roused everyone who has ANYTHING to do with WWE or it's product. However that reaction was short lived as the most likely and possible outcome of the next WWE Pay-per-view will be the same old borish trash we've come to expect from WWE. Cena overcomes the odds, and goes home champion leaving CM Punk holding a dud, instead of an all out explosive... Then again... he used that bomb once... maybe he's still got some atomic words to drop for the voiceless fan out there, and WWE writers realize this. For now one can only speculate what will happen, and this writer personally hopes to see a change in WWE, and John Cena disappear. Whatever the outcome, CM Punk will be one to watch. The reason why? Nobody in WWE needs to give him that (kayfabe) 'push', CM Punk pushes himself, and he has pushed himself above an otherwise biased opinion of him, and probably in more people than just me... I could be wrong though.
Posted by WrestleFigsUK at 21:27