I was born in 1991, I was brought up with wrestling, learned to love wrestling, and especially love British wrestling. I was educated by my granddad about classic British Wrestling, the stuff he had watched in the 70’s and 80’s, and was so fond of. He was the man who taught me about the true groundbreaking stars of years gone by, who really paved the way for all past, present and future British stars in the wrestling business.

Whereas British wrestling is barely mentioned on British TV in the current times of reality television, in the 70’s it was one of the main ratings grabbing tea time shows in the UK. People would crowd around the television to watch stars like Big Daddy, Giant Haystacks, Kendo Nagasaki, Johnny Saint etc ply their trade on a national stage, giving us an insight into the world of wrestling and more importantly showing a generation the sport.

I think it is only fitting that i kick off talking about the genuine passion that British wrestling evoked in the British public when it was at its height. It was genuinely a well respected, highly anticipated part of weekend sport, one which would be seen by thousands every week. Though the ring was smaller, and the venues only held a few hundred people, the atmosphere was electric. Fans would even get out of their seats and smack the heels with their handbags at points, which showed that crowd interaction played a key role in making the sport so big.

In my view, one of the biggest and most successful names to come from the British Wrestling scene was that of Johnny Saint, widely respected in both the UK & America as one of, if not our finest export wrestling wise. One of the greatest technical wrestlers of all time, Johnny Saint was simply a fine example of someone who had trained hard and gained the respect of his fans and peers because of this. He is of course the creator of the wonderfully named Russ Abbott Special, a move which arguably has shaped many a wrestling finisher over the last 20 to 30 years in my eyes. His matches with the likes of Johnny Kidd, Colin McDonald & more recently his appearances for Chikara fighting the likes of Bryan Danielson & Claudio Castagnoli stand out for me, in a career which was one which lacked titles or belts, but was simply phenomenally respected by the world of wrestling.

As well as Johnny Saint, 2 big names dominated the world of British wrestling in the 70’s, and big is no understatement. Weighing in at 26 stone and 38 stone respectively, Big Daddy & Giant Haystacks were 2 of the stalwarts of the era. They used their size and strength week by week, often beating smaller wrestlers, but on many occasions feuding with each other, in what can only be described as the best feud British Wrestling may have ever seen. Haystacks impressed so much in British wrestling that he eventually found game in Stu Harts Stampede promotion, before eventually becoming a member of the WCW roster and member of the Dungeon of Doom as Loch Ness, a run which was sadly cut short by Cancer in mid 1996. Whereas Haystacks looked to the USA, Big Daddy always stayed in the UK, where he was loved by fans, worshiped if you will. He feuded with the best talent of the generation, and always put on matches that are still things of legend. He is credited with helping start the career of Gentleman Chris Adams within wrestling, as well as helping push young talent like Steven Regal, Dynamite Kid & Davey Boy Smith into the public eye by teaming with them.

Now I can’t go any further without speaking about the Dynamite Kid & the British Bulldog. Together they are two of the finest and most well known stars to come out of the UK, due to their runs with the WWF & New Japan. Smith started wrestling in the UK at the age of 15, with his cousin the Dynamite Kid, who by then had become a fixture of the British Wrestling scene. Davey Boy worked hard in tag matches, teaming with the likes of Big Daddy & Dynamite to further expand his reputation, leading to a series of extremely entertaining matches with Jim Breaks, for the British Welterweight Title. While Dynamite, already established would compete against the stalwarts of the UK scene like Mick McManus & Kendo Nagasaki. It was these matches, these performances in British Wrestling that would see both Dynamite & Bulldog scouted by Stu Hart and taken out to Canada to compete for the illustrious Stampede Wrestling.

Onto a personal highlight for me from classic British wrestling, a favourite tag team of mine had to be Steven Regal, now known as William Regal and Robbie Brookside. These two great competitors would often find themselves paired together; facing some of the toughest opponents the company had to offer. One of my favourite matches of all time was Brookside & Regal vs Nagasaki & Barratt, which for me showed why British wrestling was such a great spectacle for the fans. Regal of course is one of the most successful, decorated and well respected British guys to have made it state side, and to know he got his break following his displays in the UK, always makes watching his matches slightly more sweet. Brookside also found success in the US, competing on WCW Nitro on many occasions as well as a plethora of dark matches for the WWE on their frequent tours of the UK.

I’d like to finish my analysis of stars, by talking about a masked star that graced British Wrestling, and went by the name “Kung Fu”. He brought with him a healthy mix of black belt martial arts and Judo, to be my favourite of the old crop if you will. He wasn’t the most popular wrestler, didn’t always have the best support, but he made up for that in exciting and entertaining matches. He would often wrestle, in what looked like a velvet dressing gown and a mask made of Velcro and abandoned felt. But let me tell you, if you ask me who i remember from the old British wrestling shows, with the most memories, it will always be Kung Fu. I cannot say enough good words about him, and if you ever get the chance to watch one of his matches, then by all means, take my advice and watch it!

I’d love to go into detail about every star who worked in the classic British wrestling scene, but that would take well months, and as much as I’d love to do that, I simply haven’t got enough free time. I’d like to mention some of the guys who made British Wrestling what it is today, that I wasn’t able to mention. The likes of:
• Kendo Nagasaki
• Mark Rocco
• Blondie Barratt
• Clive Myers
• Fit Finlay
• Dave Taylor
• Marty Jones
• Steve Veidor 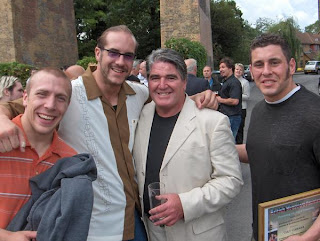 And to be honest there are countless others I respect, for both their amazing entertainment value, and for their work in paving the way for the young British guys currently trying to breakthrough in both the FWA and in North America. Without doubt the world of sport years were phenomenal for British wrestling, it really was sport at its finest, and I’m just grateful I had a grandfather who shared my passion for wrestling, and could teach me about it all.

Any comments, hit me up on twitter @WholeKirknShow
Posted by WrestleFigsUK at 13:49