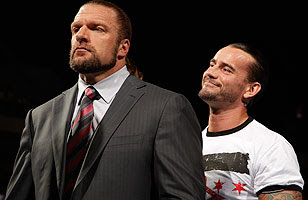 WWE Night of Champions is on the horizon, and with all WWE titles on the line, it looks to be a night full of significant action that will have an effect on mid-card titles, all the way to the headlining titles. Although Night of Champions isn't nearly as hyped as the past two PPV's, this has potential to be a highly entertaining event, depending on how a few of these matches play out. So let's get started!

Honestly I am not as excited about Kelly Kelly’s match, but what I think that’s going to happen is total dominance by Beth, then Kelly will get a roll up so winner in my opinion: Kelly Kelly

The United States and Intercontinental championship matches should be average to above average matches. All I am hoping for is that the fatal four way does not have any botches! I’m hoping for some innovating maneuvers from Jo-Mo. I think Dolph and Swagger will work as a team at the start, and of course the wild card is Vickie Guerrero. I’m sure she will have a say in this match. But in the end the winner in my opinion is: Alex Riley

The Miz & R-Truth have formed an alliance when both men realized that there are conspiracies against them that are keeping them from winning the WWE Championship. During a recent episode of RAW, The Miz challenged the champions and R-Truth accepted the challenge his partner made on behalf of the champions. I don’t honestly see Air boom dropping the titles so soon to Miz and R truth. I could see the titles change hands the next night on Raw or on the next PPV. I am looking for some great high flying from Kofi & Bourne. Along with some dirty heel playing by Miz & Truth. With that said the winner in my opinion: Air Boom

The main event is John Cena vs. Alberto Del Rio, but you already knew that.
Cena vs. Del Rio a match that his not been built up as much. I can definitely see Del Rio and Cena go into the next PPV. Let me give you a few reasons to WHY Del Rio must retain the title:
Since winning the title, Del Rio has gotten mixed reviews from wrestling fans. Some find him interesting, great on the mic and solid in the ring. Others find his gimmick to be boring. While I feel like he is fairly over as a heel, one way to ensure that he remains over is to give him a proper title reign of six months or more. It would do the WWE good to have Cena lose at Night of Champions and put him in a program that has absolutely nothing to do with the title. Ultimately, I think he'll get involved in the Triple H/CM Punk angle in some way. So with that said the winner should be: Alberto Del Rio

I am not so excited about the Henry vs. Orton match, but here’s how I think it will play out . Honestly this is as good as I've ever seen Mark Henry booked. He has been a one-man wrecking ball. He IS the monster main event heel I'm guessing Henry beats the crap out of Randy, RKO out of nowhere, and that is all. But one last thing.. I can see Orton vs. Henry round two at Vengeance!

Last but not least! The match we are all waiting for yet we all know how it’s going to play out. Nash will return and cost HHH the match so that Johnny Ace can take over, because otherwise there is literally no point to Ace hanging around after Vince's departure. Also, conveniently, it's the only way both Punk and Triple H can stay face after this match, because Punk can claim innocence and just take the opportunity presented because it fits his character, and you know Triple H wants to stay face even though the storyline would suggest it's the wrong move. Now maybe Nash screws Punk… AND THAT makes this match more interesting. Throughout this match the only thing that will be playing in my mind is… Who is Nash Screwing? Or whom is Johnny Ace screwing? Also it would be nice to have some blood in this match (wishful thinking?) Winner: CM PUNK

All I know is that this Sunday is going to be AWEEEESSOOMMEEEE
And once again if you have any comments/questions or feedback get back to me on my twitter @azansaigol and follow me.

Thanks, Azan
Posted by WrestleFigsUK at 14:20