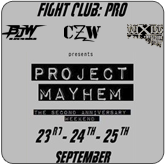 I wasn't able to call in fo the Indy Corner this week on TWS but this is what I sent the guys.

ROH’s first TV show is now in the books, 50 minutes without ad breaks but only 2 matches, OK, the matches were a decent amount of time but there seemed quite a bit of talking but I hope this won’t put the people who are giving the ROH product a try for the first time as it’s supposed to be a ‘more wrestling, less talking’ show.
As for the TV show, there is a bit of confusion as how to view on the ROH site, well - The ROH site says, Ringside members - Monday. General access members - Thursday http://rohwrestling.com/membership So yes, if you want to watch it via the site on a Monday then you have to be a paid member, to watch it for free then it’ll be available on Thursdays.

In other ROH news:

On to other things:

I am not on the TWS pre-show this week as I am at FightClub: Pro’s Project Mayhem show, it is a 3 day event featuring workers from CZW, WXW (Germany), BJW & of course some of Fight Club's very best. The first night of the shows was Friday 23/09 which I didn’t attend but I was at Saturday’s show and I’ll be at Sunday’s. The UK has had CZW guys over here before such as former owner (John) ZANDIG & Wifebeater, and they did a ‘death’ match but this time around, CZW have brought over a few more guys including Adam Cole (from ROH’s Future Shock team), Devon Moore (current CZW champion), Sami Callihan and current CZW owner DJ Hyde. Night 2 was amazing, good wrestling in the Junior heavyweight tournament that featured MK McKinnan, Rockstar Spud, Jonathon Gresham and that aforementioned Adam Cole. The Bound To Violence tournament was CRAZY – barbed wire boards, thumbtacks, panes of glass oh yes, proper wild. Sunday will feature the finals of both tournaments. Danny Havoc of CZW didn't make the show as at customs over here, when asked he said he was 'visiting friends' but apparently, passport control googled his name realized he was a wrestler and sent him packing. DJ Hyde put it across another way during the show however.

Night 1 Results (Thanks to Sam Bradley):

Keep your eyes open on http://wrestlingslasthope.com early in the week where I will post pictures of nights 2 & 3. Search YouTube for username dahardcoreone where you will find a couple of videos I posted from night 2 - Please ignore the Bruno Mars video up on there ;)

Edit: On the YouTube page there are now videos from night 3 as well, as stated, later in the week there will be a write up with pictures etc.
Posted by WrestleFigsUK at 21:06