No Surrender: The Roode Awakening By Jordan Merrick 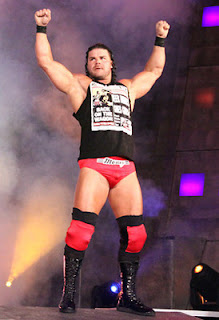 No Surrender 2011 promised a number of things.
It promised us four title matches, a number one contender for the World Title and lastly, Mickie James dressed as Wonder Woman. But did it deliver??

The Pay Per View had a total of nine matches, and took up the entire three hour block it was given. To break down the Pay Per View, here are the results with my review.

Solid opening match, Kid Kash carried this one well, Sorenson seemed a bit green, but is pretty popular with the fans. Sorenson showed promising signs, and has what it takes to go far in the X Division.

I absolutely loved the start of the match. Bully Ray got so much heat, and it worked very well with the crowd. At this stage, the crowd were warming up and really backed Storm. “Pussy Ray” chants echoed the arena! Solid wrestling, and, dare I say it; I saw some good potential for James Storm as a solo wrestler. Was a solid little match with an ending that was bound to happen, a DQ victory for Pussy…I mean, Bully Ray.

The match started of great! Mickie James was wearing the said Wonder Woman attire, and to be honest, it was the only thing hot about this match. There was some solid wrestling, but nothing too special. The crowd’s excitement slowly depleted during this one, and the ending shouldn’t have happened. Three title changes in a little over a month is not good, no matter what title it may be.

Wasn’t too bad, but wasn’t very good either. It was solid, nothing too special, did its job as a filler. The ending was so half assed, and it totally killed the match. Not much else to say about this one, other than Pope is pretty damn over.

Nothing bad to say about this match; both men wrestled solidly and were over with the crowd. Was very glad to see Matt Morgan back into the ring, real shame he got injured. He’s got some big man talent and is getting better on the mic, give him maybe one more year and he’ll be a champion worthy competitor. Once again, solid match, best filler of the night.

This match was fantastic. Class wrestling from both men, and the submission stipulation was no disappointment. I’ve always been a fan of technical wrestling, and together Bobby Roode and Gunner put on a great wrestling match. The fact Gunner was able to relinquish the Fujiwara armbar like he did was awesome! It showed real class for him as a wrestler, as well as TNA’s faith in him. The chanting in this one for Roode and BMI was off the charts! Best match of the night so far.

Yet another brilliant match! These guys have great chemistry, and put on an intense, hard fought match. There was even a point where Brian Kendrick got drilled into the floor and I thought they were gonna push for the ending of the match. What happened? They slowed it down with Aries flying into the crowd with a huge thud! Ah, what these wrestlers do to entertain us! I saw some people complain about the ending, I don’t understand why. Was a high quality match, and was up to par with the awesomeness that was the four way contract match at Destination X.

This match was the thing that made fans mark the fuck out for Robert Roode. Ray did his job as a heel, but when Bobby Roode took everything Ray could do, and asked for more, fans were going crazy. Bobby Roode was over as hell, and will ride this huge wave of momentum through to Bound for Glory. The match itself was nothing too special, but it succeeded on so many levels, that it deserves a big mention.

To be honest, Kurt should have been suspended after the shit that went down, and the fact a last minute title match was made, I assumed he was dropping the strap. Off that topic though, and onto the main event of No Surrender! The match was solid; I loved the three man German Suplex spot. It delivered as best as it could, but of course, the ending was gay. I was happy and content with Hulk interfering, but with mace? Really? That is ridiculous. We didn’t need another wrestler lose due to some sort of vision impairing projectile. Gee, thanks Russo! The fan in me is happy Kurt won though, Kurt Angle vs. Robert Roode Bound for Glory will be awesome!

Thus concludes the summary of the matches, but did it succeed as a whole?

I for one thought it was a great pay per view, it delivered good quality wrestling, Robert Roode winning and awesome X Division action; well worth the money! This leaves TNA with a really good chance to build up a very solid card for Bound for Glory. Things they need to take into consideration are:

Not letting Hulk Hogan wrestle Sting
Develop a strong feud between Angle and Roode
Give us AJ vs Daniels and RVD vs Lynn again!
Do not let Ninja’s kidnap Joe

All in all, TNA have a strong opportunity here to use the success of this PPV to make Bound for Glory the best show TNA has ever put on!