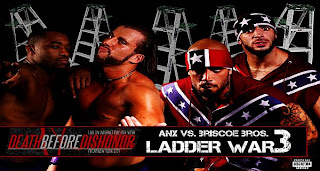 Major SKYPE issues prevented me doing my usual segment on the Total Wrestling show (see link on the right side of the page)so here is this weeks, all about the ROH iPPV from last night - Death Before Dishonor from New York.

Last night was the ROH iPPV Death Before Dishonor 9 from the Manhattan Centre in NYC. I paid for this even and was up to 4am watching it and it was a killer but anyway onto the show. The pre show had Andy 'Right Leg' Ridge went over Grizzly Redwood in a qualifier for the Survival of The Fittest match. It was an OK match, I've not seen or even heard of Ridge before and not watched much of Redwood's work so it was OK.

Onto the first match of the main show. The Embassy of Tomasso Ciampa & Rhino went over ROH TV Champion Jay Lethal & Homicide. As you may recall, Homicide went over Rhino at the last iPPV - Best in The World and I thought that was his last ROH appearance, I think this one may just be it. When he got a 'hot tag' into the match the crowd was pretty dead. I think they hold some animosity towards Homicide because he is part of the Urban Wrestling Federation. He did actually comment on his facebook after the match, while the show was still going on

“not the hometown hero no more, I'm the a rod of roh. Don't let me be a bad guy Cause I will love it like pussy and nana is right. Congrats puto. Hurt but I'm always good make room for the bad guy , there a SOB coming. Hood justice Sept 25 in pay per view”

I have always been a big fan of Homicide as I have stated before on The Indy Corner, I think it’ll be a while before we see him in an ROH ring again if ever.

Next we had one half of the ROH tag team champions Shelton Benjamin against ‘The Prodigy’ Mike Bennett. Even before the show I really didn’t think this match would grab my attention, and it didn’t really. As I think most ROH followers would of guessed, Benjamin went over.

The next match was the returning Young Bucks (Matt & Nick Jackson)vs. The Bravado Brothers vs. Future Shock (Adam Cole & Kyle O’Reily) in an elimination match. I wasn't surprised to see The Bravado's eliminated first and as ROH tag teams go, they are not on par with the rest. Future Shock who are training partners with the ROH world champion Davey Richards are a really good, solid tag team but again, I had predicted the Young Bucks would win and they did just that. Good match overall.

Now, the next match was El Generico against Jimmy Jacobs, the latter is trying to ‘find redemption’ in ROH after his past indiscretions when he ran rough shot over the promotion as leader of The Age of The Fall with one Tyler Black before he went onto become world champion and then the WWE. Anyway, Generico was supposed to face Steve Corino but Corino took a booking in Japan so Jacobs took his place. Now with this being wrestling I thought we may see Corino turn up but we didn’t but someone else did turn up and that was one Kevin Steen. He came through the crowd and asked for a microphone, he spoke a bit and to be fair I can’t really recall what was said but not long after they cut his mic but one thing I did hear him say when the mic was off was “ask Corino to ask Davey Richards why he’s not here defending his title” – A bit random I thought, could be something for the future in ROH. Steen made it into the ring attacking dome of the security then he was about to attack Cary Silkin but was halted. On a side note, Steen is set to face his former partner Generico in a ladder match in PWG for the PWG title on October 22nd.

The next match was the other half of the ROH tag team champions as Charlie Haas took on Michael Elgin, unlike the match with his partner Benjamin, I did want to see this match because I thought they would give Elgin a win as like I have said on previous episodes of The Indy Corner, I believed they would give Elgin a push in the company but alas it wasn’t to be and Haas got the win.

The next match was the battle of the former ROH world champions as Roderick Strong took on Eddie Edwards in a ‘Ringmaster Challenge’ match. The first fall was pinfall only, the second fall was submission only and if needed the third fall was to be a 15 min Iron man match. It’s no secret I wasn’t a big fan of Strong being the ROH champion but that aside, this match was VERY good – I saw a comment on twitter last night (early hours) ‘Stellar’ and it was just that. Strong took the first with a pinfall following his ‘End of Heartache’ move, Eddie took the second with a submission following an achilles lock and then the third was supposed to be decided over 15 minutes Strong got a pin over Edwards after Strong’s manager Truth Martini held Edwards’ leg down and then after that, Martini tried to interfere again and hit Edwards with the Book of Truth but missed and hit Strong, Edwards then hit Strong with the Die Hard. Following this, the bell rang and the 15 minutes was up. So with the crowd chanting “five more minutes” out came Jim Cornette and said that “it doesn’t matter how long it takes, this match will carry on until there is a winner” – Edwards was eventually able to hit the Die Hard again get the win and take the Ringmasters Challenge.

The final match was The Briscoe Brothers against The All Night Xpress in ‘Ladder War 3’ This match was as crazy as we thought it would be, crazy bumps left, right and centre. I knew the guys would bleed and I thought it would be Jay Briscoe first but it was Rhett Titus and boy was he a mess, to use a quote from yesteryear, he really did have a crimson mask. Jay was the next again, he was a mess, there was a point where you could see the blood squirting out of his head – nasty. Mark was next and then the crowd was chanting towards Kenny King “make him bleed” and I believe they got their wish in the end. The object of the match was to grab the contract that was hanging above the ring to become the number one contenders for the ROH tag team titles. Even though we have seen it before, I thought The Briscoes would get the win but it’ll be something new now as it was the ANX who won.