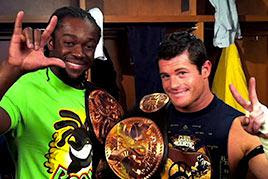 To even say WWE has had a tag division over the past few years is a stretch of
the imagination. Having a team co-hold a championship and the occasional title
defense does not make a division. First I will talk about the unified tag
titles,than I will go into the change that is coming, and lastly I will go into
detail about what tag teams are needed to save the division.

First off two sets of tag team champions never was a good idea. Now that the Tag
Championship value is at an all-time low the idea is even worse. Right now no
one cares who holds the tag titles. But if there are 4 guys running around with
tag belts, not even those people could possibly care. The one good thing about
the tag team champions was that they got to appear on both shows. There was one
team that made good use of that and let you know it. It made them seem
important. It made people care. That was the team of Jerishow. For those couple
of months while they had the belts, the titles meant something. Hell, they once
headlined a PPV. After that what happened? Jerishow disbanded. To give credit
where it's due at least they had a storyline which led to Show and Jericho to
split. Now what we have is teams spliting at random. Let me give you some
examples:
The Hart Dynasty was broken up. The Gatecrashers were broken up, then Vance
Archer was released. The SES was broken up. Santino and Kozlov had a run as
Champs before being broken up. Heath Slater and Justin Gabriel were randomly
broken up as well after dropping the belts to Kane and Big Show, who also
randomly stopped teaming after Del RIo smacked a car into Big show.

Now if we talk about the change that is coming, The heavy creative influence HHH
has in real life helps bring back the tag division At the moment we have four
tag teams The Uso's, Raw - Otunga & McGillicutty, Kofi Kingston & Evan Bourne and Miz & Truth In one night, the number of actual Tag Teams doubled. This is a great
sign. I know four teams is by no means a big number, but it's a great start.
Compared to what we had before. Miz Truth and Kofi & Bourne will bring some
real credibility to the division. It's also a good way for those four talents to
get consistent television time, but there is one thing missing. A gimmick within
the tag teams, back in the attitude era teams like Dudleys had a table gimmick,
the Hardy's had a high flying gimmick and so on. What my point is that now that
we finally have a few tag teams we need gimmicks to go with them as heel and
baby face tag teams just won't cut it.

In my opinion the tag teams to save the division will have to be Truth and Miz,
Air Boom, if HHH signs Generation Me and the Kings of Wrestling that would
tremendously help the division. I could see Vickie manage the team of Ziggler
& Swagger as well. No matter what the case things are looking up and, as an
integral part of any wrestling promotion, WWE's Tag Team Division is about to
matter once again.

If you have any comments, suggestions, or views leave me a comment on my Twitter
and follow! @azansaigol Would love to hear from you all cheers!
Posted by WrestleFigsUK at 14:13