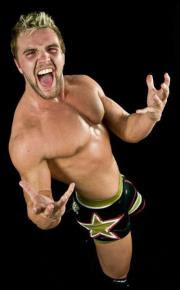 Thanks to Darren Rogers for conducting this Q&A

How long have you been involved in professional wrestling and how did you first get started in the business?

I started training a little over six years ago. This was my first involvement in professional wrestling. I'd never aspired to do anything else but wrestle. I helped out with advertising etc but this was my only involvement. After training at a less than reputable school (unbeknownst to me) for four months, I did my first few matches over that haven summer camps of 2006.

Where and with whom did you train?

Unfortunately I began with one of the worst guys in the country. I was green as they come and had no clue to just how bad this guy was. PWA, lead by the Urban Warrior taught me little to nothing. Very basic technical wrestling, a few incorrect moves but gave me my start and early experience in front of large crowds.

What do you remember about your first day of training – was it what you expected, how did you feel physically, what were the trainers like etc

Well as mentioned he was shit. Friendly enough at the time, but looking back was obviously just after money. It wasn't as exhausting as I thought, bumps hurt more that I had anticipated, but above all it was exciting. I was finally on my way.

When you were starting out, what were your ambitions in wrestling?

My ambitions always alter. My main and ultimate goal has always to one day land a contract with WWE orTNA. But I realise it takes time. Each year I set my self smaller achievable goals that will help me on my way. When I started it was all about getting on the shows and making heads turn.

When did you have your first match, and how did it go?

August 26th 2006. I got battered. Theres a pic somewhere of the state I was in. I had a hand print across my back where I'd been hit so hard to could see the pattern in his fingers... No joke.

What do family and friends think of your career choice?

Supportive. My dad was the only one who ever doubted it. He wanted me to pursue a career in acting (my other passion and what i got my college diploma in) but as my name spread and he came to some of the more high profile shows, he like everyone else just encouraged me. My mum I have to mention has been outstandingly supportive. When I was younger, we never had much money, but she did her best to get me in the right foods for my diet and even paid for my gym membership the first year I started. To this day she will always offer to wash my gear, cook my food to take away with me. A true star who i owe a lot to.

Do you have another job outside of wrestling or is this what you consider your ‘main’ job?

I am a professional wrestler. This is my job. I have had other jobs in the past when I was part time. But now I earn and work enough to have this as my job. It's tough and financially not always good. But how many people get excited to go to work?

What are your feelings on the state of the wrestling business in the United Kingdom?

It needs sorting. We have so many issues I can't think of where to begin.
We've got a situation where anyone can run a show. And book whoever they want. This is the biggest problem. The general public see's posters for a wrestling show as WRESTLING. They do not see the promotions name or understand the different promotions. Therefor we have the issue of them going to a terrible show. With guys who work once a month, for free and are dreadful, the family then thinks 'British wrestling is awful' we all suffer. Less audiences, less wages, less shows, less work, less pro wrestlers and high quality shows. It could kill off the industry in this country.

What we need is for all the top promotions to say 'right, I will only book wrestlers of a certain level. If anyone tries to book a show without our permission or without the appropriate wrestlers, then you face prosecution.' on top of that a union to secure that we have set incomes and sick pay. To many wrestlers work through injuries out of necessity.

When you were first approached about Progress Wrestling, what were your initial thoughts?

New promotion. Might be another piss pot wanting to play promoter.

What did you think about Chapter One?

Outstanding. They proved that they are a professional promotion, everything in the right place and RESPECT there workers. Show from top to bottom was brilliant, I loved every minute.

When you are not training, traveling or wrestling, what do you do to relax?

Spend time with my friends making short movies, go for walks with my girlfriend or talk about budgeting for a future together. To be honest I'm never truly away from wrestling. I'm always thinking about new ideas to improve something.

Finally. Where do you see yourself in 2 years time?

For more information about Progress Wrestling, check out http://progresswrestling.com/ or follow us on Facebook
Posted by WrestleFigsUK at 10:06