The State of The Wrestling Biz By Chris Cugini 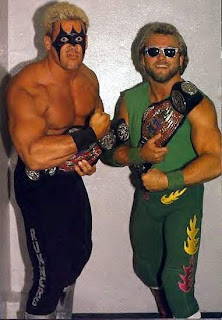 The one question that gets asked more than any other about pro wrestling is simple...Is the state of the business better today or was it better in the past? Well if you base it on production, money, how great the wrestlers look as they come down the ramp, which takes longer to get to the ring then the time of the actual match that is seems like a afterthought in the past 8 years. Me on the other hand the answer is simple, I miss laying down on the floor with a stack of wrestling mags like "The Wrestler" "PWI" "Inside Wrestling" I still have the first issue of PWI kept in a safe place. As I was saying before I veered off, the Days of laying those publications down on the floor reading the columns or the rating of a promotion that you heard that was great but you have no other means to see it but in these average sized black & white photos for example a man that comes to mind is the big Texan Bruiser Brody! My god he leaped of those grainy pictures. A larger than life figure he was, back then it was not just looking great or buff it was the facial expressions these guys made that brought you in, Brody did that and then some, You look at his photos it says a million words, it was like a promo without hearing a single sound.

That is just a very small thing that has changed in our favorite sport, cable, internet is another topic all to its own and some other day can get into that with the greatest of ease. The State of Wrestling is not all lost fans although it is not the old territory days where wrestlers could test their craft on both sides of the country make a little money and keep on going to the next region. But the main reason that format worked so well besides having (What the Biz needs Today) OPTIONS! there where all sorts of options at that time but also the number one factor that made that Era the greatest of all time...The Hall of Fame talent that kicked ass and got there ass kicked all over the globe. Today’s manufactured talent was rampant for a long while, same build, same hair even the same tattoos on their backs. Even how they took bumps was taught the same; maybe it was just easier that way. But before I end I have to say I have been involved with pro wrestling since 1979 in some way or another, I used to buy, trade or tape shows myself wrestling territories since 1980 for God sake I still to this day study those tapes and was lucky to have had friends on both coast to trade with so I was blessed in the 80's to get on a weekly basis Florida, Georgia, NWA, Mid Atlantic, Mid South/UWF, World Class, Portland, WWWF/WWF, Stampede, AWA, ECW, Memphis and what a time to have those coming in the mail it was the best and I still have them over 1,500. My point being that sometimes when you think the business is crap along comes a promotion ROH with VERY talented wrestlers and they are great people too, ROH Roster from 2002-2007 might be one of the best in the history some will make it some will not but all have left a mark again my point being it seems like a page is turning because of this group CM Punk/Brian Danielson/Samoa Joe/AJ Styles/Austin Aries/Antonio Cesaro/Davey Richards/Kevin Steen/El Generico/Eddie Edwards and the highly anticipated debut of Jon Moxley or his WWE name Dean Ambrose he is a can't miss heel...The State of Professional Wrestling will be just fine with guys being the future stars. Thank God...

Thank you very much.

Hit me up on twitter @ROHCode
Posted by WrestleFigsUK at 20:50