ROH: Seeking the Spirit of 1997 By Shaun Nichols 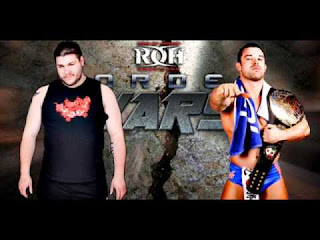 On May 12th, Davey Richards will defend the ROH World Title against Kevin Steen in Toronto on a show named 'Border Wars' on iPPV, this as led to some speculation that ROH are aiming to try and copy the WWF's USA vs Canada feud from 1997.

The WWF feud was one of the most critically acclaimed wrestling feuds of the last 20 years even though it wasn't particularly financially rewarding and Steve Austin didn't catch fire as a draw until 1998 and the angle with Mike Tyson. It's easy to see why on the surface why wrestling fans would look to see Davey Richards (representing USA) against Kevin Steen (representing Canada) would be a 21st Century version of this, but look a little deeper and you would be wrong.

In the WWF in 1997, both sides of the border took distinct sides, the American fans were solidly behind Steve Austin and we're sick of Bret Hart, the Canadian fans stayed loyal to Bret and aimed their ire at Austin and other American stars. In ROH we don't have this dynamic, virtually all of the ROH TV is taped in Baltimore but it's clear that at TV, the Mania iPPV shows that the fans want to support Kevin Steen in his efforts to become ROH World Champion it's not a question of national partisanship.

Davey is simply not the fans favourite against Kevin Steen, if ROH were able to do TV tapings in both Canada & USA and show the difference in the fans attitude that would be one thing, but they can't. ROH fans want Kevin Steen to be successful and they feel that way both in the USA and in Canada.

There is also the difference in that back in 1997, Bret Hart although the clear leader of the Hart Foundation wasn't on his own. Owen Hart, Bulldog and Brian Pillman had plenty of fans so the package benefitted from the strength of the collective. Davey, who is basically playing the Bret Hart role in 2012 is supported by Kyle O'Reilly. You can't compare the two.

What we can compare and what ROH will hopefully use as a blueprint to be successful is that the three main protaganists can be traced directly back to 1997. Firstly we have Davey Richards, widely seen as a company man who tries his best for the company (Bret Hart), Kevin Steen who is the anti-hero but is loved by the fans (Steve Austin) and finally Jim Cornette who is the authority figure is who is concerned that a wrestler will ruin his promotion (Vince McMahon).

Now Davey as the company man and standing up for what he thinks is right has demanded to face Kevin Steen for the title, a move banned (the piledriver) by Cornette as been re-instated so Davey in storyline wants to prove he is better than Kevin Steen. This is very similar to how Bret Hart was booked in the run-up to Wrestlemania XIII against Austin. He wanted to show he was a better man.
What ROH as to manage to ensure is that they need Kevin Steen as the top babyface coming out of the Border Wars show, as the WWF managed to do with Steve Austin after WM 13. The fans want to support Steen and keeping him as anything other than the promotion's top babyface is simply a mistake. That's not to say that Steen should become ROH champion next month, in my view he shouldn't. ROH as ofen found itself too slow in putting a wrestler on top, but in this case there is more interest in seeing Steen chase for the title than winning and simply defending it.

Personally I would not want to see Kevin Steen as ROH champion until Final Battle 2012 and that would be a fitting climax to his ROH redemption to finally win the World Title, two years after being forced to leave after losing to El Generico at FB 2010. To get there you after be able to override the stipluation that Steen only gets one title shot at the ROH World title. To me the answer is obvious, Cornette in desperation as to cost Steen the title and by doing so turn full blown heel. This then needs to be supported by Davey Richards falling into line with Jim Cornette so like many ROH champions he makes the move from babyface to heel. Cornette's actions then allow him to move from an authority figure to a manager figure for Davey. Thus making use of one of the best interviews in the industry but also explaining why eventually Steen will get another shot.

Although Davey hasn't faced a backlash from the fans, his main title feuds have been against Roderick Strong and Eddie Edwards and being honest the ROH fans don't particularly want to see either guy as ROH champion more than Davey, Steen though is a completely different animal. The fans want Kevin Steen as champion, eventually they will get it but to ensure that ROH gets the best out of 2012 then Kevin Steen will prevail against a heel champion in Davey Richards supported by Jim Cornette.

ROH in 2012 isn't about USA vs Canada but you can't deny that we what we will see this year is heavily influenced by the 1997 characters of Steve Austin, Bret Hart & Vince McMahon.
Posted by WrestleFigsUK at 12:42