Injuries in The Industry By Lynsay Mackay 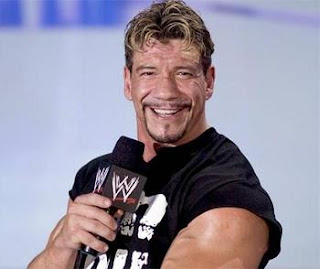 Here we have the late Eddie Guerrero who is one of MANY pro-wrestlers that suffered with terrible injuries during his career.

I was watching Raw on Tuesday afternoon, following my self-imposed media blackout, and couldn’t help let out a groan when I saw Beth Phoenix do herself what appeared to be an ankle injury going after Bella, 1 of 2, on the outside of the ring. I have no intention of discussing the legitimacy of this injury here. Whether this is a worked angle or not makes no difference to this piece and if you are looking for such conjecture I suggest you look elsewhere.

The involuntary groan was one of the many indications of how far I have come as a wrestling fan from the angry teenager who took up the obsession some years ago. Unlike most fans, who will tell you they watched it as a child with friends, or that Granny took them to the local promotion to prod the bad guys with her umbrella, I came to it later in life. When my little brother turned the channel that fateful morning he had no idea what he was about to unleash. It began with a torrent of abuse from yours truly, “what are you watching that garbage for, you know it’s all fake?” though possibly those were not my precise words given my age and attitude. He was a sweet little thing though and after some grovelling I allowed him thirty minutes; max.

I still remember it vividly, a mullet flying through the air on the head of one of the most talented wrestlers the world has ever seen, followed, in quick succession, by a dislocated elbow and one of the stupidest sentences I’ve ever uttered. “How do they fake that?” The Radicalz had just entered WWF from WCW and I had just witnessed one of Eddie Guerrero’s first matches with his new brand. He wore that cast for a long time and I watched every week of it. I had watched his elbow pop out of joint and yet down he came to that ring every week and while not wrestling full matches he was still physically involved. Why, I kept asking, why would a man in so much pain not just go home and rest up? Why did he keep coming back?

The more I watched the more characters I fell in and out of love with and subsequently the more uncomfortable certain matches made me. You see the passion and obsession of these men and women had become my passion, my obsession. I was, and still am, emotionally invested in the individuals as well as the product as a whole. Seeing HHH blow his quad and continue the match made me scream, watching Joey Mercury have his jaw nearly ripped off by a ladder almost lost me my lunch and witnessing Beth Phoenix climb out of the ring in a normal fashion and hurt her ankle made me groan.

I used to relish the TLC matches that the Hardy’s, the Dudley’s and Edge and Christian performed, now I watch them through my fingers, if at all, and think of them with sadness knowing the issues both Hardy’s and Edge have suffered, in some part, due to the nature of these matches. But the matches can’t be held as the only blame. It is the passion and the obsession that holds the most blame. To work through pain to maintain your spot, to continue a match after injury to give the fans what they want, to be in the limelight, to entertain, to amaze while being virtually unable to sleep through the agony at night.

The wrestling industry is hard on its performers. Last year I had the privilege and honour to meet one of the world’s hardest working Luchadores and a genuinely wonderful human being, Cassandro El Exotico. He trained with us and taught us some incredible new techniques but I think, as with most wrestlers you meet, we learned the most simply by listening to his stories. They were funny and moving, worrying and unbelievable but above all else they were passionate. Everything about him was passionate and I will never forget him telling us about once having a shoulder injury so bad he couldn’t lift his arm above his head, but when he went through those curtains he used his good arm to throw the bad arm up in the air so that he could achieve his trademark extravagant entrance .

Passion and obsession are linked and sometimes we let them blind us to what is more important, our wellbeing. If the injury is legitimate Beth should rest up and not rush to return. It can be a devastating blow to momentum of a character, such as with Wade Barrett and it can also lead to a loss of confidence and self esteem not to be competing in the industry you love, often with those you love. But to push too hard for a premature comeback can be dangerous and set you back further; one only has to go back two months and look to Christian to know that not every early return, can be a Royal Rumble moment.

Cassandro is an American born independent wrestler who was in a lot of pain even when I met him. He has recently gone through reconstructive surgery on his knee to repair a lifetime of injuries and will thus be unable to work for some time. To donate to his recuperation fund please follow the link below.