The Dance Floor By DiscoStoo 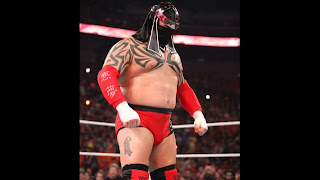 What’s that coming over the hill…?
It’s probably a monster.

The role of the monster in wrestling, whether face or heel has always been a simple one. Strike fear into opponents, dominate with size and brute force.
Currently, the classic role of monster is the new force de rigueur, with the re-introduction of Brock Lesnar and Lord Tensai, the astonishing rise of Brodus Clay as well as the recent re-invention of Kane. Add to this mix Ryback, Mason Ryan, Mark Henry, Kharma, Great Khali, Big Show and sporadically The Undertaker and you have a veritable “mass of humanity” waiting to crush unsuspecting jobbers.

Arguably the most successful monster heel of all time has been The Undertaker, though even his style has evolved over the years from supernatural invincible to wily workhorse, and incorporated a more rounded character, as well as a re-invention into The American Bad-Ass which is closer to Callaway’s real life persona.

Kane and Abyss both evolved into complex creatures, with more scripted lines, and most memorably the removal of Kane’s mask in 2003, which forced the persona of Jacobs into a new personality driven role, arguably his most successful period with numerous WWE Tag Team championships with Big Show and Taker (both previous monster heels), and a lengthy ECW reign. (Well, lengthy compared to the one night reign as WWE Champ.)

Vince is well known for his big man fixation, a trait that stems back to Andre the Giant being such a big pull. However this has made him unpopular with most in the wrestling fraternity, his eagerness to push Snitsky, Test and A-Train over more technical and better liked individuals seems crass and rudimentary compared to his undoubted business acumen.

Recently however, a change in the paradigm of the monster, particularly in WWE extols scenes reminiscent of the early 90’s. Tensai with manager Sakamoto is a transitional replication of Yokozuna and Mr Fuji. The manager generates heat and provides a speaking platform for the seemingly invincible heel. Sakamoto seemed very capable of damage in the recent bout with Cena. This management angle has always worked best to promote a monster heel, think Million Dollar Man with Sycho Sid, Armando Alejandro Estrrrrrrada with Umaga and Harvey Wippleman with Adam Bomb, Giant Gonzalez and Big Bully Busick.

I think that Sakamoto will eventually prove to give Matt Bloom’s recent gimmick some legit heat and with the likes of Cena putting him over on RAW recently he’s getting a push from on top. Time will tell whether creative give him the right feud and direction.

Ultimately, we look at what impact these monsters can have on the WWE title picture. Brock Lesnar will certainly be looking to retain a title he hasn’t held since losing to Eddie Guererro at No Way Out in 2004 and the mouth-watering tie with Cena at Extreme Rules will provide a platform to take a title shot at CM Punk. Lord Tensai is getting a serious push and some air time and will be in the title hunt in future months, and Kane will continue to bob above the mid carders as the roster remains fragile.

Look at who’s movin on up and who’s getting down in the pro wrestling industry.

1. Brock Lesnar – UFC’s loss is our gain, the attitude slant is creeping back into WWE, but at the expense of future stars?
2. Daniel Bryan – He’s over with the attitude generation, but will WWE utilise this?
3. Brodus Clay – over with the smarks, the kids, now he just needs to get over with the rest of the locker room.
4. Dean Ambrose – his work with Foley will give him massive exposure.
5. Bobby Roode –a solid match with long time Beer Money Inc. partner James Storm at TNA Lockdown impressed many.

1. John Cena – the worst 3 months of Cena’s career? Yes, but he’ll come back.
2. Sheamus – from a huge babyface momentum pre-mania to a shambles of a ‘match’ with Bryan. Almost forced heel by 18 seconds of shame, he needs to work hard to recover.
3. Eric Bischoff – Pushing his son needlessly at a PPV that failed to deliver spectacularly.
4. Alberto del Rio – Recent mentions of leaving the WWE, combined with his fall from main event at ‘Mania 27 to not making the card at 28 due to injury concerns.
5. Lord Tensai – an underwhelming impact on the hottest RAW crowd in years after a decent promotional build up.

Disco Stoo
Posted by WrestleFigsUK at 02:20