Let Me Speak On This with Stu Rodgers 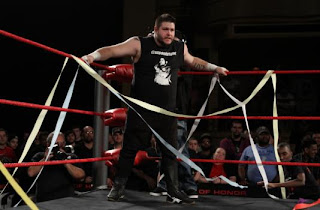 What a weekend of wrestling it was, some good, bad and indifferent.

Of course the draw in Miami was Wrestle Mania and Indy promotions Ring of Honor & Dragon Gate USA went down there just as they did for Atlanta last year and put on iPPV's.

ROH was very unlucky with it's streaming that goes through the Go Fight Live company, constant problems all weekend.

I really feel for ROH, one is because I am a self confessed ROH mark and they get enough crap from the fans of the mainstream products as it is be it for production values or how it's 'serious' about it's product rather than 'sports entertainment' like so for them to have this happen was terrible for the company and the good matches that took place maybe overlooked because of this. I just hope, when the future iPPV's role around, these type of problems can be ironed out.

From what I saw from the ROH iPPV's on night 1 Kevin Steen vs. El Generico stole the show in a ' last man standing' match on night 1 and on night 2 that man Davey Richards over Michael Elgin was all kinds of greatness. Richards gets a lot of flack on the internet for his style but this match was great and I hope you guys get to check it out.

I've not seen much of the DGUSA cards but from all accounts they were very good.

I have watched most of Wrestle Mania, you all know WWE is not my cup of tea but I'll try and be as objective as I can.

I watched the show live from the Team RAW vs Team Smack Down, didn't pay much attention to it to be honest.

I was relatively looking forward to Punk vs Jericho and thought it was a good match to be honest, I did pop I must admit when Punk put the vice on and I liked the little twist with Jericho using his knees to escape it and then when Punk re- applied it he positioned himself differently.

This led to the main event, The Rock vs John Cena. Built for a whole year, the promo's building up to the match have been OK, some better than others and I'm not going to lie, WWE fan or not, I didn't expect much from the match as you have Cena who does the same repetitive stuff every match and The Rock who even oh his best day is only a decent wrestler but great on the mic and with him being away for so long I just wasn't expecting much.

On a page on Facebook I use I pointed out how quick Rock blew up and how much it was noticeable he was calling spots but maybe like people will after reading this, I got pretty much flamed. It was tonne expected to be honest, the guys on the page in question are pretty much WWEbots and don't follow the indies like myself and I didn't get much agreement on there with what I said, which is fine, I was just pitting across my opinion, if people would of agreed then that would of been great but it wasn't about getting approval it was just something I wanted to say.

On RAW the following night to no real surprise, Brock Lesnar returned and hit John Cena with an F5 giving Cena yet another massive name to get embroiled in a feud with.

From the outside looking in, I'm glad Lesnar is back, and I await to see what happens with him this time in the WWE.

As always, hit me up on twitter @WLHSTU or if you want to talk indies follow @TheIndyCorner
Posted by WrestleFigsUK at 02:33