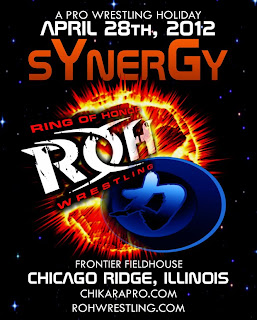 This past Saturday, my friends Justin, Luke and I traveled to Chicago Ridge for ROH and CHIKARA's "Synergy" and wow, what a night. We arrived at the Frontier Fieldhouse at about noon, an hour and half before the doors opened, so we got to talk to some fans in line and was pretty cool. Just before the doors open, Billy Kumohara, CHIKARA's Quiz Master came out and asked fans trivia questions which would let five fans in early and get a prize pack. I was lucky enough to win one of these myself and got seats in the front row near the walkway. I was able to also talk to several wrestlers, like El Generico, Tim Donst, Greg Irons, The Young Bucks, Cary Silkin, Chuck Taylor, Gavin Loudspeaker and Jakob Hammermeier who is one of the funniest guys to talk to. I also bought a Kevin Steen T-shirt and all three nights of King of Trios 2011.

The CHIKARA show started with Gavin doing his usual sing skit. After wards, The Swarm and The Shard run out leading to them vs. The Colony and Jigsaw. This match was really fun to watch live. Lot of brawl so it was kinda hard to see what was going on if it wasn't right in front of us. Good way to start and really excited where the Geiko storyline goes. Next was Kobolds taking on Mixed Martial Archie, formily Archbald Peck. This match was the funniest thing I've ever seen live. The crowd LOVED Archie and was chanting "Archie" and "Better than Brock" to him. Guy is super over and a really great worker and makes the MMA gimmick work.

Next was the The Throwbacks vs. Kodama & Obaryion. This was a good match and pretty fun. Mr. Touchdown is really good for how new he is and Dasher is great too. Not a huge fan of Kodama and Obaryion but they work a heels. Mr. Touchdown is teasing turning heel so looking forward to where that goes as well. Next was 17 taking on the new CHIKARA student: Tianlong. This was only like a minute long and was made to have 17 take out Tianlong to send a message to Quackenbush, who is currently injured.

Then we had The Young Bucks vs. Arik Cannon and Darin Corbin. I knew everyone but Corbin but he manged to look good. Bucks were great as always and Cannon was surprisingly agile for his size. Solid match.

Next we had intermission where they had Hallowicked take pictures with fans, which I got to do which was cool. During this Donst was in line and jumped him and stole his Young Lions Cup. Nice job by CHIKARA for the surprise reactor. During intermission, I got to meet The Colony, Mike Quackenbush, who was easily the nicest guy in the world, Johnny Gargano, who is nice too and Sara Del Rey.

First match back was 3.0 & Spectral Envoy vs. Bravado Brothers & Tim Donst/Jakob Hammermeie. Hallowicked wasn't out due to being jumped. Bravados looked good here and looks like they might be feuding with 3.0 in the future. Delirious came out and distracted Ultra Mantis Black during the match and Hallowicked came out and chased Tim Donst to the back. Hard to follow all the action but great storyline match.

Surprisingly next we had the Grand Championship match with Eddie Kingston vs. Kevin Steen. Steen came out in a Bumblebee mask, mocking CHIKARA but the crowd loved it. Crowd was split for this match and these two were very brutal to each other. Ending was Steen kicking Eddie in the balls leading to a DQ, so I am betting on a rematch down the road.

Next was Gran Akuma vs. FIST. This match was good but my friends and I had more fun just yelling at Icarus and watching Chuck and Johnny joking around. Funny stuff. Greg Irons came out and helped Akuma roll-up Johnny for the win. Main event time! Sara Del Rey vs. El Generico! and WOW! What a match. Sara and Generico are both underrated for how good they are. Sara was on her "A game" and Generico didn't hold back this includes the hardest chop to the chest I have ever heard and three Yakuza kicks to the face. Sara won with a piledrive that looked like it hit Generico right on his head. OUCH! After wards both shook heads and showed respect. What a match! And that's all for CHIAKRA

Came back for the ROH show and got in a little behind some people. Met a few ROH guys but couldn't get an autograph without paying for it, which sucks. Until Steen came out and shouted out he was doing it for free which resulted in a huge crowd running over to him. Funny stuff. Glad Steen is keeping in character all the time. We were in general admission but I ended up standing by the walkway to get closer to the action.

First match was Roderick Strong and Michael Elgin vs. ANX. Fun tag match. Elgin is so fucking strong it is scary! They are really playing up Elgin and Strong having issues during the match. After the match Strong and Elgin almost got into it which led to a "Fuck him up Elgin" chant. Elgin looks to be leaving The House of Truth soon which might be smart.

Mike Bennett and Maria were out next for a promo where Bennett put himself over nicely and the crowd was really against him. Few "CM Punk" chants and "Shut the Fuck up" chants. Mike Sydal, Evan Bourne's brother came out for a quick match, it was just okay. Lots of "Colt Cabana" chants during this match.

Next was The Young Bucks taking on the Bravados and WOW were the Bravados over here. Crowd loved them! Chants for "Justin Bieber" for Lancelot and "Pedro" for Harlem to poke fun at how they looked but the Bravados used the chants to their advantage. Bravados look so much better in the ring and lot more confidences. Got a big win over the Bucks in a great match.

After this we had someone from Sinclair Broadcast Group came out and said "Death Before Dishonor" will be here in September. Huge "YES!" chant for that. Might have to go to that show. Steen and Jacobs came out to a huge pop and said how he will be Champion by then. This lead into them vs. El Generico and BJ Whitmer. Huge brawl to start with refs breaking it up and said this was a regular tag team but Steen wants a NO DQ Match. A phone call to Jim Cornette and he gets his wish. This match was a lot of fun to watch live. Nice chair shots and violent stuff. Crowd wanted Tables and they did at the end with BJ hitting Jacobs with a huge exploder suplex off the top for the win. Great match! Steen was getting "Next World Champ" chants.

After intermission we had the Team ROH of Jay Lethal, Adam Cole and TJ Perkins vs. The Colony. Another great match. Everyone worked great with each other. Few nice high spots and tag spots. Ending was kinda weird but it worked. Hoping we see a rematch someday.

Davey Richards & Kyle O'Reilly vs. Charlie Haas & Shelton Benjamin was next. WGTT got booed a TON! Charlie actually got in my face before the match and almost hit me. Awesome moment for me. Crowd was very anti-Charlie Haas though out the whole match but got into it when Davey was working at high speed and hitting some nice spots. Kyle did a sick dropkick to Charlie when he was outside sitting on a chair in the corner. WGTT won in the end and Davey and Kyle had words. Davey said how he loves Kyle but would put him down if he had to. Davey then put over the main event and wished good luck to the Briscoes.

Main event time! Jigsaw and Hallowicked got a lot of heat from the ROH crowd which was kinda weird but had some cheers. Briscoes were BIG time over. Crowd was excited for this match. Lot of good stuff and brawling to the outside and throwing each other into the guardrails for a few minutes. Both team had a good showing. Lot better than their "Homecoming" match. Saw two refs bumps with nice false finishes for both teams. The Colony came out which lead to Lethal, Cole and TJ Perkins coming out to root for their company. Briscoes with the win and a big celebration from the crowd and wrestlers at ringside. Everyone shook hands after wards and the Briscoes put over CHIKARA. Hoping we see these two companies work together again soon. WHAT A NIGHT! Highly recommenced that you check out these shows when they come out. Thank you ROH and CHIKARA!