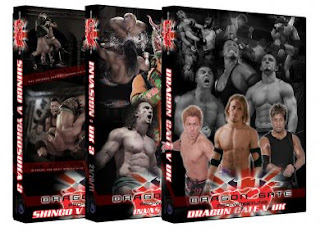 This was the late addition to the Dragon Gate UK tour, the DVD starts as is now customary with a video package highlighting the action from the previous nights action in Nottingham. Great package as always, really can't recommend that show enough. Onto the final nights action though...

This is total comedy, Manson who comes out in a straitjacket found a number of fans to sit on during his entrance and followed this up by stealing the ref's shoes and proclaiming them to be the first pair of shoes he'd ever owned. He was representing 'Team Big Lenny Henry' and was announced at a weight of 680kgs. Well it makes a change, I'll give him that.

There was very little to this, we had a three way nipple grab spot and a three way choking spot which both featured the ref. They had a chop contest where Manson chopped himself, he went for a dive but ignored Gamma and dived to the floor on the wrong side. Finish was Manson doing the Rocky Romero Lady in the Lake spot, Gamma grabbed his hand and rolled him up for the win. I don't have any issues with comedy especially in the opener, fans enjoyed Manson's amusing commentary and the match only went 8 minutes. **

Fans tried to remind CIMA that he was lucky to win the previous night, match started with a lot of mat work and reversals with Lion Kid probably edging it. CIMA finally gets the heat but there really isn't a lot to this. CIMA with a stiff kick and a senton for two, Lion Kid hits back with a huracanrana, a 450 splash by Kid misses. CIMA with a nice missile dropkick, a Schwein and a Meteora later and CIMA was celebrating his 2nd DG:UK win on the spin. This was basic average fare to be honest. **1/4

Typical three way fare to start things off with the two babyface teams double-teaming Hulk & Tanazaki, Hulk with a wristlock and we get the crowd pleasing Mexican Wave spot with all six men. Last man is Tanazaki so Hulk has to let go. We get another similar spot moments later this time featuring headscissors, Tanazaki again is the last man and decides to kick everyone including his unfortunate tag partner.
Hulk and Tanazaki are the stars here and keep the match moving, though its only in the last few minutes does the match start to pick up. Team UK nearly pin Hulk with some nice tag team wrestling, Tanazaki nearly knee lifts his way to victory. We're getting to the point where you can see the wrestlers waiting for their spots. Dragon Kid with a crucifix on Kirby, dropkick by Yoshino and we have our winners. ***

Tozawa's back to hating the UK so no big running dives tonight from him. Scurll really seems to have improved a fair bit in the last 12 months or so. Scurll dominates the early action, both men trade several spin kicks which the fans appreciate. Scurll with a running dive but Tozawa cuts it off by kicking him in the head.

Long period of basic offence from Tozawa, Scurll with a nice dropkick to the knee followed immediately with one to Tozawa's head. Second attempt at the running dive pays dividends. Fans starting to sense an upset here, Tozawa goes for a German suplex but this is smartly turned into a cradle by Scurll. Plenty of forearms, with the fans chanting 'Yes' for Scurll and 'No' for Tozawa. Roaring Elbow from Scurll gets a two count but that's as close as he's getting to winning. Tozawa with a bicycle kick to the back followed by a German suplex for 2. Quickly followed by a Package German suplex for the win. Best match so far, Tozawa on the mic leading to the fans chanting 'No' at him which was funny. ***3/4

Plenty of nice mat wrestling, reversals and even clean breaks to start with, before PAC's strength advantage starts to show. No early dives though, the highlight early on is Northern Lights suplex from PAC. PAC goes for a 450 buts hits nothing but knees and Yokosuka starts to go to work on his midsection. Yokosuka somehow ends up outside but narrowly avoids a running somersault dive by PAC. He takes advantage with a great dropkick to to the kness as PAC somehow lands on his feet.

Yokosuka punishes PAC's knee with kicks, dropkicks, drops him on both knees and even brings out the figure four leglock. No Whooo's from the fans either. PAC makes the ropes and is soon on the offence with a springboard Ace Crusher. Another springboard is countered into a exploder. Match is really hitting its stride, PAC with an awesome 540 splash but Yokosuka rolls him up for surprise 2 count. Yokosuka hits the Jumbo no Kachi! but PAC kicks out. PAC gets the win with a roll up off the ropes. Match of the night. ****1/4

Main event time, cautious start by both men though Shingo is able to physically dominate him. Haskins gets the advantage by dropping Shingo's right arm over the top rope. Haskins works on the arm for quite a while, until Shingo nearly killed him with a Saito suplex. More chops and the like, running dive from Haskins sends Shingo nearly sliding behind the curtain.

Nice jumping swinging DDT by Haskins, more chops and forearms. Haskins with a Shooting Star Press for a 2 count, Shingo hits back with a Deathvalley Driver, a lariat and Made in Japan but he can't get the all important three count. Fans react big to the kickout but one lariat later and Shingo finishes the UK tour 3-0. Another good match to finish the card off. ***1/2

Although this was the weakest of the three UK shows it was still a fun event with three good single matches to finish the tour. On the extras there's a great highlight package of all 6 Dragon Gate UK shows since 2009 with the trailers which is ended by a trailer for a Lion Kid DVD of his matches on the DG:UK cards so far

Please buy this DVD and the previous 2 nights over at http://dragongateuk.com
Posted by WrestleFigsUK at 04:54