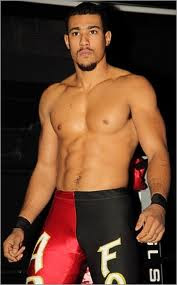 The Indy Corner: First off AR, thanks for taking the time to chat with us today.

The Indy Corner: Tell us, were you a fan of wrestling growing up and if so, who were your favourites to watch?

Yes, I have been a fan since around the age of 12. My favorites were Stone Cold, The Rock, and Rob Van Dam.

The Indy Corner: What was it that made you go from being a fan to actually wanting to become a wrestler?

Backyard Wrestling and playing around wrestling was so fun that I knew I wanted to really train and be a wrestler.

The Indy Corner: Around what time period and with who & where did you start your training?

I started training in March 2007 under Total Protection Mr Hughes in Atlanta. I moved from my home state of CT to train.

The Indy Corner: Was there any point during your training you thought about getting out?

There was never a point in my career I felt like getting out.

The Indy Corner: Do you recall your first match and if so, who was it with and what promotion?

My first match was at the WWA4 in Atlanta against Johnny Kadilac. I teamed with another guy named Tex and we got beat even tho it was a handicap match. Back then my ring name was AmpliFLYer

The Indy Corner: Most of the matches I have seen you in were for CZW but you also do quite a bit for Dragon Gate USA so tell us, how did you get hooked up with DGUSA?

I was talking to Chris Hero in the back during a CZW show and he asked for my Email, the next day I had an email from Gabe. I was super-pumped. We talked about my EVOLVE debut and after EVOLVE I debuted in DGUSA in a 6 man.

The Indy Corner: Tell us about your first match in DGUSA

My first match in DGUSA was a 6 man and it had a real lot going on in it. I had a blast and got a taste of what that company was about. It was a huge learning experience to me.

The Indy Corner: Up to this point, what would you consider your best match in DGUSA?

I would consider my best match in DGUSA so far to be me vs. Tozawa or me vs. PAC. I really like my matches with Swann too.

The Indy Corner: Onto CZW, this year you will take part in the Best of The Best tournament but you were actually in last year’s where you faced Sami Callihan & Jake Crist, memories of this match?

Memories of my last year’s BOTB match are that it was crazy non-stop action, almost like a non-stop car crash. Really enjoy being in the ring with two guys that good.

The Indy Corner: Talking about Sami, he got to the final last year falling short to Adam Cole but he has had an amazing 12 months travelling the world and being called the top independent wrestler around by none other than Paul Heyman, give us your thoughts on Sami.

I have a ton of respect for Sami. I think he’s an awesome wrestler even though we might not see eye to eye. Sami is one if my favourite to wrestle cause I know we are going to go all out and that’s what I’m about.

The Indy Corner: Before we get onto this year’s Best of The Best, I have to ask, I was going to get to see you wrestle for the first time when you came here to the UK to work for Fight Club: Pro but you got turned away from the UK when you arrived, can you tell us what that was about?

The Indy Corner: Do you still hope to wrestle here in the UK and do you know if you’re coming over in the near future?

I really really want to wrestle in the UK more than anywhere in the world.

The Indy Corner: As I said, you were coming over to work for Fight Club: Pro amongst others but as other guys from CZW such as DJ Hyde, Devon Moore, Adam Cole & Sami Callihan have worked there what have they told you about the promotion?

They all tell me it’s an awesome place.

The Indy Corner: Now, this coming Saturday CZW has their annual Best of The Best tournament and you are pitted against ACH & Lince Dorado in a first round match, what can the fans expect from this match?

Fans can expect that match to be absolute chaos!

The Indy Corner: Two guys in the tournament this year are from the UK and the aforementioned Fight Club: Pro, these are the excellent MK McKinnan & Trent 7, what do you know about these guys?

I’m not familiar with who they are.

The Indy Corner: Out of the field, who would you like to face in the final before taking the trophy?

The Indy Corner: Who on the indies at the moment not in CZW or DGUSA would you like to face?

I would really want to face Kevin Steen.

The Indy Corner: And to close is there anything you want to say to your fans reading this interview?

I’d like to say to my fans thank you so very much., I appreciate all the support, I will do my best to impress you guys, thanks. Check me out on my Facebook and also check out WWA4

The Indy Corner: Thanks again, and good luck in Best of The Best.

EVOLVE 11 which will feature AR Fox against Johnny Gargano will be on iPPV on Friday April 13th and you can order it over at http://wwnlive.com