CZW Best of the Best XI Report by Jason Namako 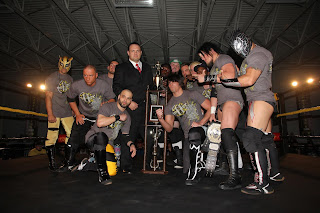 McKinnan & Younger were eliminated via countout & finally Trent was eliminated after submitting to Callihan's Stretch Muffler. Callihan re-opened his wound from the match the night before with Finlay during this match. Crowd also really got on Trent 7, who had a lot of back and forth exchanges with the crowd.

2. Best of the Best 1st Round: Alex Colon w/Chrissy Rivera defeated Greg Excellent & Willie Mack to advacne to the semi-finals.

Mack eliminated Excellent with a frog splash and then Colon eliminated Mack with a springboard Tombstone. During the match, Excellent danced to Brodus Clay's entrance music as well as the combatants chasing each other with the Benny Hill music playing. Crowd was really into Willie Mack and chanted "Please come back" after the match.

3. Best of the Best 1st Round: Samurai Del Sol defeated "The Kentucky Gentleman" Chuck Taylor & "The Whole Shebang" Johnny Gargano to advance to the semi-finals.

Taylor eliminated Gargano with a roll-up and then Del Sol eliminated Taylor right after with a roll-up of his own. One thing of note, Del Sol was really over with the crowd with the "Lu-Cha" chants in conjuction with his entrance music.

4. Best of the Best 1st Round: "The Whole Fox'N Show" AR Fox defeated ACH & Lince Dorado to advance to the semi-finals.

5. CZW Wired TV Title: Dave Crist defeated Jake Crist (c) by pinfall to win the title after nailing Jake with 2 low blows while the referee was down.

Not a lot of crowd noise for this match, which is unfortunate.

6. Best of the Best Semi-Finals: "The Callihan Death Machine" Sami Callihan defeated Alex Colon w/Chrissy Rivera by pinfall to advance to the finals with a roll-up after reversing Colon's attempt at Callihan's own Stretch Muffler.

Crowd was really into this match, especially with the brawling around the ring. After the match, Callihan said he would not lose in the finals on his 3rd try while also putting over Colon as a future star.

7. Best of the Best Semi-Finals: "The Whole Fox"N Show" AR Fox defeated Samurai Del Sol by pinfall with the Lo-Mein Pain to advance to the finals.

The crowd was not very into the beginning of the match, but picked up towards the end. Fox had injured his ear in the 1st round and blood was pouring out of his ear. Its uncertain as to what the actual injury was to Fox, but it looked pretty bad.

There was a contract signing between Drew Gulak & Danny Havoc for their match on May 12th in Philadelphia. Gulak spoke for a bit while having toilet paper streamers thrown at him by the crowd. Havoc then attacked him with a barbed wire baseball bat and busted Gulak open for the first time in Gulak's CZW career. Havoc challenged Gulak to a no-rope barbed wire match for May 12th & Gulak accepted.

8. Ultraviolent Encounter: "The Bulldozer" Matt Tremont defeated Clint Margera (subbing for DJ Hyde) by pinfall with a powerbomb onto a barbed wire chair. Hyde originally was to face Tremont, but instead had Tremont face Margera.

After the match, Tremont chalenged Hyde again & Hyde said he would face him as long as Tremont wins Tournament of Death in June. Hyde finally said that Tremont's 1st round opponent would be the returning Abydullah Koybashi from Big Japan.

During the match, chairs, kendo sticks, thumbtack bats & a water jug were used.

Tremont was very over with the crowd while Hyde got a lot of heat.

9. Best of the Best Finals: "The Callihan Death Machine" Sami Callihan defeated "The Whole Fox"N Show" by submission to win the tournament with the Stretch Muffler.

After the match, Hyde presented the trophy to Callihan, but then spit in his face. Callihan talks about his past in the tournament and how he finally captured the Best Of The Best Tournament crown. Callihan then taunts AR Fox and says that he is the best, Drake Younger then hits the ring as DJ Hyde returns to the ring. Younger challenges Callihan to a match at the May 5th Indianapolis event, but then Callihan waits for him to turn around and nails him with a low blow and leaves.

Hyde puts over all of the competitors in this year's tournament and then makes Callihan vs. Younger next month a 2/3 falls match. They go to the People's Choice voting and for the 2nd year in a row, AR Fox wins. Hyde says instead of a plaque for Fox, he will grant him a title shot against any champion at anytime. Hyde finally asks if the fans want to see the non-CZW regulars back in the future, to which the crowd loudly cheers for, especially for Willie Mack.

Crowd was really into the main event and were more behind Fox then for Callihan.
Posted by WrestleFigsUK at 09:20