The Return Of The King By Simon Miller 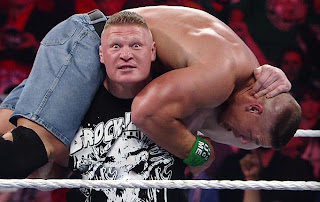 We just want to welcome Simon to Wrestling's Last Hope, Simon used to write for FSM magazine and we are very pleased to have him on board.

The internet is often related to wrestling’s major downfall and sometimes for good reason. After all, there’s little doubt that hearing a sold out arena chanting Brock Lesnar’s name before the man had even returned took something away from the moment. Thankfully, the crowd’s insistence to roar the former UFC champ from entrance to exit turned it into one of those moments fans won’t soon forget. The real question, as ever, is what this actually means for the WWE as a whole. From the moment Lesnar was booed out of Madison Square Garden to try and find his fortune elsewhere his name has been synonymous with a comeback. The hooha that he managed to garner just by having a meeting with World Wrestling Entertainment behind closed doors in 2005 was just the start of what would become a ‘When’ rather than an ‘If.’ Brock had become part of WWE’s chosen crew, making it even more startling how few now remember the speed at which he blazed through the ranks. His ‘next big thing’ tag was genuinely how Vince and co. saw the behemoth; the marketing campaign and push painstakingly crafted to turn a beast who looked like a champion McMahon himself had put together into one that the entire world saw too. The plan went off almost flawlessly as well, apart from one glaring error. A sure case of getting too much too soon, the golden pathway built for Lesnar saw his rise happen at a frightening pace, handed all of wrestling’s plaudits in a flash of glory. Unsurprisingly, the rising star soon ran out of options and momentum, tiring of the rigorous travel any pro-wrestler has to harden to within a matter of years. He then walked out on the people who turned him into a superstar. What happened next, as they say, is history, with the boy from South Dakota becoming exceptionally smart in how to advertise himself meaning his light never actually burnt out. He even left the UFC on somewhat of a high, courageously attempting to battle back after a near-death illness and then, seemingly, being beaten by an opponent who may not have been playing entirely by the rules. His next step? The WWE and right into a programme with everyone’s favourite scapegoat John Cena. The reaction of many is to lambast Lesnar’s homecoming, insulting the man for his now apparent weak ring skills and the audacity he had to give up so much when he was on the precipice of so much more. To try and argue against such facts is no easy task, but to even toy around with the idea of doing so is somewhat missing the point.

Brock Lesnar is, as already mentioned in this article, a superstar. Transformed into one thanks to the WWE machine, he has never been out of the press for any great amount of time because of who he is. It certainly didn’t hurt that he skipped across the pond and schooled a few mixed-martial artists, but even if Brock hadn’t of found success in that arena it would’ve simply taken a slight readjustment until he discovered where his next goal lay. To be blunt, putting Lesnar’s name in lights instantly equates to a marquee match. The wrestling purist may debate otherwise but Lesnar vs Cena is infinitely more interesting and fascinating than, say, Cena vs Ziggler or, dare I say it, Punk. Be it by design or fate, Brock has done an oddly good job in never overstaying his welcome in any territory. His reappearance, then, doesn’t feel tired or obvious – it’s more like the run we’ve wanted to see out the man for some time. When the two clash at Extreme Rules I don’t think there’s a person on the planet who would expect a ‘Match Of The Year’ candidate, but it’s surrounded by intrigue and, much like the WrestleMania card just gone, actually offers up a match that can’t be called with any real assurance. Cena is coming off the biggest loss of his career whereas Lesnar needs the win to continue his momentum all the way through to next year’s ‘Showcase Of The Immortals’. It’s a bout people actually want to see. This curiosity will follow Lesnar around over the next 12 months too. How long he’s going to play around with Cena is anyone’s guess, but there’s no way it can go longer than three PPVs maximum. It seems logical to the majority that ultimately we’re heading to a Lesnar vs Rock/Taker payoff in 2013, and when the build for that starts is anyone’s guess. It should mean at least one more adversary for Brock to face; even now I’m excited to see who gets the rub and how it’s handled. If the master of the F5 is involved, my attention is instantly peaked.

That’s not to say this doesn’t raise a large question mark over how WWE sees the future of its company. There’s a pool of talent who very well could be this decade’s ‘next big thing’ but no one responsible appears sure on who on Earth that is. The break needs to be dangled like the proverbial carrot – there’s no one who could dispute that – but would Jack Swagger, even if booked in exactly the same way as Lesnar was in 2002, actually make the same strides forward? It’s unlikely. Yes, it certainly wasn’t an easy run for the farmer, but once all the pieces started to fall into place his status as a top guy was ensured. That wasn’t by chance. It was by design, and WWE knew he had the talent and look to back it up. With this in mind, no matter how you look at it Brock’s return does directly relate to a smaller amount of opportunities and one less main event spot to be snapped up which isn’t ideal for those perfecting the craft. It’s made slightly more difficult when you consider The Rock has recently come off a near identical run; surely there’s a few raised eyebrows as to the confidence the men in suits have for its collection of upstarts. Business is business, however, and while the locker room supposedly gets a little flustered by this situation, Lesnar’s few dates for a mouth-watering amount of cash will, very likely, wield much better financial results. As horrible as it may sound, money will always be the true bottom line.

In short, for a man who has watched wrestling fanatically for the last 20 odd years, the return of Brock Lesnar is nothing but a good thing. He generates interests, publicity and, let’s not forget, can put on a pretty good show when he wants to. Sure he can’t talk and the less said about his top rope abilities the better, but from the moment he did his patented shuffle, I couldn’t help but smile. Thank you, old friend… you’re back!

Any comments then feel free to hit me up on twitter @SystemLinked_Si
Posted by WrestleFigsUK at 12:59