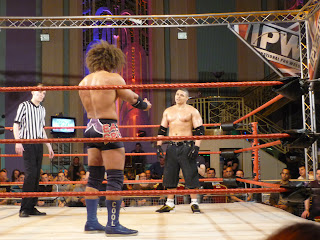 Let me start by saying that I hate to badmouth another wrestling promotion. As someone that has worked behind the scenes for FPW I know how much hard work goes into running a show, how much time and money has to be invested for little reward, and how things happen that aren’t your fault but you still have to find a solution – often out of your own pocket.

With all that being said, IPW should not have booked ‘The Troxy’ as the location for this show.

I was sat with a promoter, a wrestler and a trainee and despite the good in-ring action, we were left cold by the whole event. At one stage, during the women’s match, the wrestler turned to me and said “I want to fart but I’m worried that everyone will hear it” – he wasn’t joking, during the Masters vs Stixx match there were times when you could hear the general hubbab of conversations around the venue. Now, this could be due to the general stand offish-ness of IPW crowds. I’ve been to 2 of their shows and they don’t seem to do a lot of chanting and there’s not a single sign in the crowd. I asked a guy sitting next to me, at the Young Bucks show in Sittingbourne, why there were no signs and he said “We don’t do signs in IPW” – like it was somehow beneath them. Isn’t wrestling supposed to be fun?

Now, it was publicised before the event that ticket sales weren’t great. We were lucky enough to have VIP seats but the seats were awful so we waited till Andy Quildan came out and managed to grab 4 seats in the 2nd row. After chatting to various people over the weekend about the problems, I think that the cost of tickets and the venue lost IPW their regular fans – while the overseas contingent of Carlito, Masters and M Dogg 20 weren’t well known enough to draw the casual fan in. Apparantly, Kevin Nash would have been as I spoke to a few people who were gutted he pulled out (I was relieved...)

The first match was a ‘money in the bank’ style ladder match. Note to IPW – INVEST IN STRONGER LADDERS! It was a mess. Travis and Kirby kept throwing the ladder out rendering it useless pretty quickly. Just climbing it looked ridiculous as it went sideways the higher the wrestlers climbed. At one point it collapsed and we were worried for the health of Travis as he took a horrible bump. Leon Brittannico impressed (but more on Lucha in a moment), Noam Dar will be a major star soon – the kid oozes charisma, Matt cCoss didn’t get a chance to do much but did get the crowd to chant “Yes, yes, yes” which was the loudest chant of the whole night (sadly), and Lion Kid did some good flips. Sadly, no one was given enough time to shine – and with the ladder gone they were very limited. Eventually, Kirby found another ladder but he had to hold it for Travis to climb. He looked really angry at the end, not the sort of expression you’d expect bearing in mind he won, so I suspect that the ladder collapsing screwed up a lot of spots.

Now, I said that “yes, yes, yes” was the loudest chant. The 2nd loudest? “Lucha”. Yes, there were a lot of Lucha fans in attendance – I saw quite a few shirts and Leon got a good pop. Someone started an “IP Dub” chant in the first match, it didn’t go anywhere, which is pretty sad really.

Haskins vs Redman was next – strange positioning to put it 2nd on the card for what was a big grudge match. They put on a good match though, we thought Haskins would win as Redman is FCW bound, but the crowd were split between cheering for each of them – Redman didn’t really do anything to get the crowd behind him so Haskins winning was kind of popular. This set the trend for heels being cheered in every match except for the 6 man tag. One thing that annoyed me about this match, if Redman is angry at Haskins for turning on him, low blowing him and spitting in his face, why did he start with a conventional lock-up?

Match 3 was the women’s tag – Perfect Storm had good heel personas but the crowd died for this – the Blossom twins were very generic and didn’t really interact with the crowd. Women’s wrestling is a bit of an enigma to me. I like watching Sara Del Ray but if it’s not her I really can’t invest anytime to watch it. The Blossom Twins won. Yeh.

Last match before the interval was Carlito vs Kincaide. The crowd popped huge for Carlito who showed more charisma in this match, both before and after the bout, then he did in his entire WWE run! I think he was supposed to be the heel, but everyone cheered him, there were a few guys next to me (who brought apples for Carlito) who went nuts for him the entire time he was out there – Carlito kept looking over at us with a puzzled look on his face as if to say “you know I’m the heel, right” because these guys would not stop cheering for him. After the match, which Kincaide won, Carlito carried on with some comedy aimed at UK women but we still loved him.
Interval time – managed to say hi to Danny Garnell, Rhia O’Reilly and Teb – manager of The Bhangra Knights...

Chris Masters vs Stixx was up next, and the drunk Carlito fan next to us also had a man crush on Chris Masters as he spent the whole match shouting “we want Masters” despite him being right there infront of him. This gave Stixx someone to play to – although I think our drunken friend decided to call Stixx “a pussy” as that point! Then he lost the ability to speak and started chanting “we want mustard” – why no one from the security at the venue or IPW team didn’t ask him to keep quiet I don’t know. As for the match, it didn’t do anything for me. Masters is huge. Not just big. Absolutely enormous. Like a wrestling figure on steroids. Which I’m sure he isn’t. He was, like Carlito, super over with the crowd but at least Stixx played heel (unlike Kincaide) – Masters won, then celebrated with the fans at ringside and seemed really happy.

6 man action next. The feud between Spud and Dave mastiff has been a highlight of IPW for me recently, so I was looking forward to the payoff. Martin Stone was eliminated quickly after a belt shot. For me, the jury is still out on Stone. I don’t think he is back to anywhere close to 100% as he seemed to be protected here. We guessed that they had to get rid of people quickly, so Sha Samuels and Terry Frazier got counted out, leaving Mastiff with Spud and T-Bone. These 3 worked really well together, Spuds facials and overly dramatic acting were great (though he’s not for everyone) but I really like him. Mastiff eliminated T-Bone which gave the crowd what the wanted, Mastiff killing Spud. And he very nearly succeeded as he sent him up for a backdrop and Spud either didn’t rotate enough or didn’t get the push he wanted, as he only just managed to avoid landing head first. It was a scary spot. Mastiff got the win, and looked really good.

Main event time – Marty Scurll vs Sami Callihan. Both men got big pops and put on the best match of the night. Callihan, who seems to want to become Raven, has really impressed me over the past 12 months – I’m not sure he would fit into the WWE or TNA but as long as he avoids doing anything too silly he could be a top indie star for years to come. Scurll should be in a major fed. He is only 23 and is solid, over with the crowd and could play face or hell with the right opponent. I’m hoping that TNA gives him a call and he joins their British contingent real soon. I don’t think Zack Sabre Jnr has any aspirations of going to the US, he prefers Japan, so a LDRS vs Machine Gunns feud might never happen – but Marty could definitely be a good addition to their X-Division ranks. As for the match, it went back and forth but Marty prevailed and became the British Cruiserweight champion.

So, good action in the ring, dead crowd for half the show, annoying drunken fans, poor seating – some of these elements IPW could control, a lot they couldn’t. I know why Andy Quildan booked this arena, he thought it would be a chance to show IPW was a major player, the footage could be touted to TV companies, and British wrestling might get be back on UK TV screens. As it was, the core of their audience didn’t travel from Kent to north London and NWE pulled out leaving them high and dry. IPW need to have a long hard look at what they want to achieve in the future, set reasonable goals and perhaps choose their business partners more wisely!

Thanks for reading, hit me up on twitter @DarrenRogers71 and please give a
http://AtomicLariat.blogspot.com a look please
Posted by WrestleFigsUK at 20:52