A Rant on Hulk Hogan & TNA By Raymond Catone 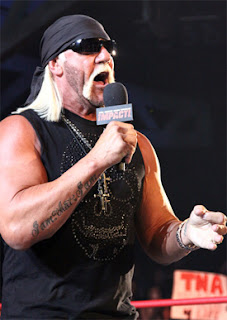 Hogan and Flair: Please get the fuck off TV. When I say TV, I literally mean I don't want to see them on any show on the planet. That's how fucking sick I am of seeing their faces. Like I mean, I go out of my way to watch TNA, I watch it for their original talent or their non WCW/WWE talent. I tune in to see guys like Aires, Roode, Storm etc.. I don't want to see Hogan, we saw him ten years ago and even then we didn't want to see him. Same with Flair. Hulk Hogan is an asshole and looks out ONLY for himself. In fact, I just now realise if he wasn't that huge megastar 3 decades ago, someone else would be! That's a fact. Just think about it, if it wasn't him, some other guy would come along. That's life, it happens. There could of been even someone BETTER than him, it's just Hogan was at the right place, right time etc..

Hulk Hogan is also a hypocrite. He says he cares and loves the wrestling business, he says he loves the fans, but how the fuck does he? If he REALLY loved the wrestling business he would piss off and stop grabbing all the attention and all the fucking spotlight. All he cares about is money because he is a money grabbing whore. He may not be as desperate or as bad as Flair, but Linda kicked his sorry ass in the divorce settlements. And who has Hogan ever put over since joining TNA? Hogan/Bischoff/Flair insult us by bringing Garrett Bischoff to TNA. Just because his father can make it happen. I would be willing to bet my house Garrett would never be in TNA if it wasn't for his father. Do you disagree? No you don't. Answer this: As a fan of pro wrestling, would you rather see a guy who worked his ass off in the Indy circuit to wrestle on your TV screen? Rather than Garrett Bischoff.

Moving onto them not putting over talent. When you compare WWE veterans to TNA veterans, you can see how fucking stupid TNA are. Why? Because Hulk Hogan has too much creative control. In WWE, you have guys like Jericho, Foley, BROCK LESNAR who help WWE wrestlers. You can argue if Jericho did/didn''t put over Cena in 2005 when he left WWE for the first time. Foley has put over numerous of guys, including Edge at WrestleMania 23. Although Cena is already over, Lesnar jobbed to him, to make Cena not look weak and pathetic. Hell, Cena has put over a shit load of guys too. The Rock put over The Hurricane in 2003. That's how WWE capitalize on their well over talent. TNA don't do that. Instead, they build the fucking show around Hogan. Why? I'd love to know.

Since Hogan went to TNA, their ratings have not even improved. They average what, a 1.0 -1.3 area each and every week? Were they not doing that before? Hogan proves he cannot improve TNA's ratings. Why? Because there is NOT A BIG DEMAND FOR HIM ANYMORE.

Hogan, we seen you in WWF, WCW. You never show us anything new. The fans who chant for Hogan will only ever be those particular fans. They're the loyal TNA fans. TNA, you're not going to attract new fans in with the show being built around Hogan. That's not a prediction, it's a fact. Their ratings show that.

When I go to watch TNA, Bobby Roode, James Storm or any of those guys, should be opening the show. I don't want to see a 15 minute segment starting with Ric Flair asking Hogan to fight with him. I don't want to see the show end with Eric Bischoff covered in shit. Then again, that shit is probably a metaphor for TNA's booking and Hulk Hogans creative control.

Like people, am I wrong here? Please answer this: Do YOU like Hogan in TNA? Do you want to see him? Do you respect him?

I'm not saying TNA should release him, just get him off the fucking show and give that TV time to newer talent. Hogan can do good for TNA but BEHIND THE SCENES. He has experience obviously. He's not completely useless.

Let me know your thoughts. Before I stop writing; I'm not a hater of TNA wrestling.