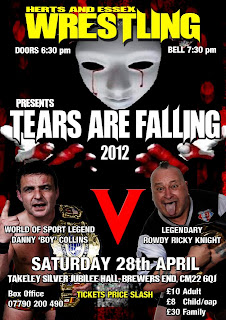 Last Saturday I made my way down to my local promotion HEW. The promotion itself in the last couple of years seems to have become more of a showground for the talent of WAW then an individual promotion. That in itself means that some of the promotion’s achievements have been over looked. However if the end to Tears Are Falling is anything to go by then HEW once again has the fire to stand out the way it has done in the past, by doing things that blur the lines of shoot and work.

While the card at first glance didn’t stand out as being anything that would blow the audience away that can sometimes prove HEW’s strength; having the lesser cards being the more eventful building up to bigger events down the line. Saying that this didn’t seem to stop most of the HEW faithful who packed out their little hall in Takeley and were their usual receptive selves for the most part. They didn’t make a bad choice either as all the matches were good.

Another thing that stood out was that following, what seems to be some success, from their last event they now have a regular commentary team on hand to call the action. It certainly helps make the shows feel a little bigger. Not only that but it helps make the matches seem better when watching them on DVD releases. Also worth noting is that regular MC Steve Lynsky was absent and Commissioner Cox was his replacement. Unfortunately Cox’s lack of experience as an MC showed but it didn’t seem to impact the overall quality of the show.


The first match on the card featured the HEW debut of “Bully Beater” Milky O’Hagan as he took on the intimidating, though mildly inexperienced Mitchell Starr. Milky is a very talented worker but is currently struggling to get over spending a number of years as a comedy character. Before the match he cut a positive anti bully promo that really seemed to go over well with the kids in the audience. The match itself was a well told story of the plucky babyface trying to takedown the bully heel. Some of the crowd took a while to get into the match but that didn’t seem to do any harm to the action going on in the ring. Milky put up against a valiant effort where it looked at time like he could pick up the victory but Starr got the best of him in the end with a neckbreaker variation.

Due to a slight card shuffle, that I’ll go into later, the next match was a rematch of sorts from the previous event featuring the winner and loser of the fatal 4-way that opened Living on A Prayer 8 in Brad Slayer taking on Zebra Kid. For my money Zebra always has been one of the best, most believable workers the UK has currently on the circuit. On the otherside of the ring Brad is a young guy with a good upside that has potential to do well. The match itself was a great encounter with Brad’s technical style playing off against Zebra’s thuggish Hooligan style, which really helped put the crowd solidly on the side of young Slayer. One thing that made me smile was referee Michael Mann busting out the classic rule of not being able to touch a guy while he until he had gotten up from the previous move. Eventually Zebra got the win by low blowing Brad behind the refs back allowing him to get counted out of the ring.

The last match before the interval was a classic old school brawl between veterans Danny ‘Boy’ Collins and ‘Rowdy’ Ricky Knight. Ricky did his typical pre match spiel that always gets the crowd vocally into the match. Danny Boy maybe getting on in years but is not letting his ring style show it. A lot of the action in the match was very hard hitting. Zebra Kid has often stated that Danny Collins was one of his heroes and it certainly shows where he got his stiff looking style from. At one point the action spilt to the outside that sent one of the ringside commentators running for cover. The end to the match was a bit of a contrast to the ground oriented match with Danny winning with a top rope cross body that still fitted in with the match and was a believable finish.

The first match after the interval featured EWW’s women’s champion Skarlett taking on the Shimmer and HEW woman’s champion Sweet Saraya for the HEW belt. One thing that stood out from the start, that Saraya even pointed out before the bell, was that both women were dressed in black with fishnets and red hair as well as both being champions (Saraya mentioned it was flattery gone a step too far). Appearances aside the characters of both women really stood out and the contrast complimented each other well. Saraya worked over Skarlett well with her submission and hard hitting style with some great comebacks from Skarlett, at points even using the moves Saraya had used on her. After a lot of back and forth Saraya got the submission win over Skarlett with a boston crab. Following the match Saraya went over to the ringside commentators and turned the table over on them, Skarlett on the other hand freaked out yelling at the audience for not helping her win.

In the main event of the evening saw the Devil’s Playboys defend their tag tam titles against the Young Ones. Originally this was scheduled to have WAW’s Special Edition, Brad Slayer and Kip James, challenging but Kip was unable to make the show. Resulting in Brad changing places with TJ Daniels and Alex Young making a welcome return after a few months away. This did make more sense as Young Ones are more established in HEW so in theory more eligible for the title shot. The match itself was a solid back and forth encounter with the Playboys using their power and size advantage to combat the speed of the smaller Young Ones. Both teams played the Face/Face match well with the crowd being familiar with all the guys in the match meant that they were invested in both teams so neither ended up losing out on any crowd support. The climax of the match came with both TJ and Brett Meadows getting the tag from their respective partners but Meadows managing to overcome TJ’s house o’ fire with an Essex bomb for the win.

The ending of the match is what made the show memorable. Immediately following on from the celebration at the end of the match EWW’s Charlie Rage and Dominator, accompanied by Skarlett, ran in the from door and started attacking the Playboys leaving Sam Knee bleeding quite badly in thee middle of the ring. With this all of the locker room ran to the ring to help out which certainly was an interesting image seeing people who had been rivals in previous matches united against the intruders. Following this the commissioner started getting issuing people claiming they needed the hall empty to make t easier for the medical assistance that was on the way. As people started to leave Danny Blaze made his way in claiming that this was all an elaborate set up and the start of the ‘Age of the Blaze’.

The ending can be seen here. http://youtu.be/TMK7PsicUsE

While it seems up in the air as to the level of planning involved in that end part going by Sam Knee’s facebook page he was admitted to hospital to be patched up and didn’t compete at the WAW show the next night. This certainly creates a level of intrigue as to where this is going to go. Will it stay solely in HEW or will there be some form of receipt at a future EWW show? Neither promotion’s exactly share a big crossover of fans but if this is an invasion angle of sorts then it could work in their favour. If HEW is going to start booking again with this sort of forward thinking then it certainly gives their shows a level of interest that could encourage a healthy level of company loyalty, as they have just announced they will soon be running a bigger venue in Braintree Leisure centre then it can’t hurt to have a great angle going in. I know it certainly has me interested.

For information on HEW and their upcoming shows check out http://hewwrestling.com
Posted by WrestleFigsUK at 12:35