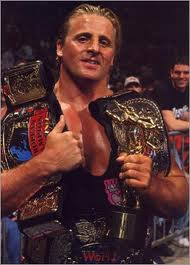 It has been 13 years today, since some witnessed one of the most tragic moments in live television history. On May 23, 1999, Fans were waiting for the “Blue Blazer” to make an epic super hero like entrance. Instead we heard JR announce “this is not a part of the entertainment tonight, this is as real as real can be” But the people in the arena did not know that Owen Hart had fallen to his own death. It’s a very sad part of WWE history.

Rather than dwell over it, I’d like to celebrate his accomplishments, and best moments.

One of my personal favorite moments of Owen, is when he won King of the Ring on June 19, 1994. The man was so happy, and he was so deserving of it. And he wore it well. Then there is the match he had with Bret at Wrestlemania X, Brian Schmid ‏@SchmanthonyP agrees! “Gotta be Owen-Bret at WrestleMania X.”

We can’t forget later that year - Michael Jezykowski ‏@TapouTGuy407 said “Survivor Series 94 when he was begging Helen Hart to throw in the towel, he played the role perfectly.”

There are thousands of quotes of fans talking about how much of a family man Owen was, and how he really did love the biz. I asked "What's one thing you have to mention when you think of Owen Hart?" Jacob Steinbrook ‏@Jacob4Freedom said “Ribbing and family.” To sum it up - Polar Bear ‏@TwiztidRellik9z says ”you can't name just 1 favorite moment because everything he did was memorable #RIPOwen who's still the #KingOfHarts“

Whether you were watching him in WWF back during Saturday night main event… or you followed him in through his year in WCW, or you watched him return to WWE with THE NEW HART FOUNDATION, or his long term feud with Bret, or when he was teamed up with the famous British bulldog, or watched him entangle with Jarrett, it’s all memorable. The man was taken way before his time and it’s sad. Chris Gelling ‏@cabby316 said “He was always exciting to watch cause you never knew what he was going to do next, great athlete, gone way too soon.” And we all couldn’t agree more.

So today, please remember- its possible to be a king, and hold multiple belts, work for multiple promotions, but you cannot fly

If you ever want to give me your opinion, please- Find me on the Twitter @HEELchampMANDY or email me heelchampmandy@gmail.com
Posted by WrestleFigsUK at 11:52