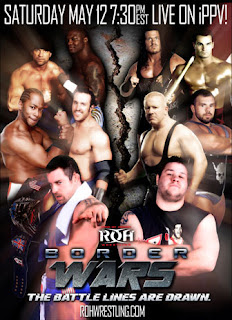 Ring of Honor have finally announced where the fans unable to attend the upcoming iPPV Border Wars from Toronto, Canada on May 12th can order the show from and that is direct off their very own site http://ROHwrestling.com – Some are complaining even now it has been confirmed where it can be ordered that it took ‘too long’ but I don’t feel that way at all, I just hope, I really do that all goes well with this stream after the disaster that was Showdown in The Sun.

Now onto the show itself, the main event is set to be ROH World champion Davey Richards vs. Kevin Steen. This match has been built up for a while now with Steen berating both Richards & ROH executive producer Jim Cornette. Work or not, Steen has made some valid points one being when ROH had an iPPV in 2011 Richards was over in Japan and as Steen pointed out the world champion should of been on the show and who could argue?

Recently the news came out that Richards was involved in a car accident which led to NJPW stripping him and his partner Rocky Romero of the IWGP Jnr heavyweight tag team titles and there was a fear Richards wouldn’t be available to defend the ROH strap against Steen on the iPPV but Richards has tweeted that we have no need to worry, he’ll be at the iPPV.

Also on the card we have once again, the ROH tag team champions The Briscoe Brothers will face Wrestling’s Greatest Tag Team but this time in a ‘fight without honor’. I’m not a fan of WGTT and seeing them against The Briscoes again is not something I’m looking forward to but a fight without honor could be something.

ROH world television champion Roderick Strong will be taking on the one and only Fit Finlay. This is Finlay’s first match in ROH, he has of course worked some matches on the US & UK indies since his release from the WWE including a couple of matches against Sami Callihan which were great. This match should be decent, and I am looking forward to seeing the ‘Belfast Bruiser’ in an ROH ring.

Former ROH world champion Eddie Edwards finds himself on the card squaring off against Rhyno who is now part of Truth Martini’s stable. I like Edwards’ work whereas I’m not over keen on Rhyno’s but I expect him to go over ‘Die Hard’ in this match.

Lance Storm asked for and received a rematch with Mike Bennett who defeated him at Showdown in The Sun. Storm looked OK in that match and Bennett just oozes charisma and is a very good worker to boot. Maybe we could see Storm go over in this one and maybe set up a rubber match but I’m expecting it to be great either way.

Jay Lethal will be trying to be the first man in ROH to defeat Tomasso Ciampa but I think the latter will win and hopefully move up the card to face the ‘bigger’ names on the roster.

A match I’m looking forward to on the show is Adam Cole vs. Michael Elgin. I am a big fan of Cole and I have been really impressed with Elgin recently, especially in his Showdown in The Sun match against Davey Richards which I think will be up there for top indy matches of the year. Cole got the shock pinfall win over Richards at the 10th Anniversary show in the tag tem main event but I think Elgin should go over in this match so hopefully he can stay in the world title picture. Should be a very good match.

And the final match announced is a six man tag between The Young Bucks & Mike Mondo vs. The All Night Xpress & TJ Perkins. I’m a really big fan of the Bucks and I think ANX are a tad overrated but I do think the ANX/Perkins team will win this one.

The card looks very good and I’m really intrigued to see what will happen in the title match.
Posted by WrestleFigsUK at 09:21